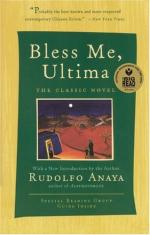 Rudolfo Anaya
This Study Guide consists of approximately 32 pages of chapter summaries, quotes, character analysis, themes, and more - everything you need to sharpen your knowledge of Bless Me, Ultima.

This detailed literature summary also contains Topics for Discussion on Bless Me, Ultima by Rudolfo Anaya.

Bless Me, Ultima is considered a classic piece of Chicano literature and helped earn Chicano novels a place in mainstream American literature. The book was first published in 1972 and was the first novel of Rudolfo Anaya. He published a second version in 1999 that includes an introduction where he says that he is “especially pleased when young readers read and discuss my work.” Bless Me, Ultima is the first in a trilogy about the life of Antonio Marez y Lunas and though it is not autobiographical, Anaya says that he wrote parts of his own personality into Antonio’s character. The book has been included on several banned book lists for its use of strong language and sexual themes, but has also been recognized with several literary awards.

When Bless Me, Ultima begins, Antonio Marez y Lunas is just six years old. He is the youngest of six children and the only son who still lives at home. His mother hopes that he will become a Catholic priest one day and his father hopes that he will become a vaquero and work on the land like a cowboy. An elderly curandera, or shaman, named Ultima comes to live with Antonio’s family and he is immediately drawn to her wise ways. Ultima sees the potential in Antonio and takes him under her wing. She mentors him about the medicinal powers of herbs and gently shows him why evil cannot win out against good. An owl arrives on the property when Ultima moves in and Antonio understands it to be the protector of Ultima and her spirit.

Ultima is called to reverse a curse that is placed on Antonio’s Uncle Lucas, and she insists on taking Antonio with her. Antonio stays by her side for three days as she uses herbal medicine to heal Lucas, who has been cursed by the evil Trementina sisters. Ultima confronts the father of the young witches, Tenorio Trementina, and tells him that the evil will not go unpunished. Following this event, Antonio begins to question his own spirituality and why God was unable to do what Ultima could. He attends school for the first time in the fall and though he feels like an outsider at first, he quickly learns English and is passed from first to third grade at the end of the year.

Antonio’s brothers return from fighting in World War II and they are changed. They are more restless than ever and spend all of their fighting pay on alcohol and prostitutes. Two of the brothers decide to leave for Las Vegas, while one stays behind to work at a local grocery store. Tenorio shows up at the Marez homestead with a few other men, demanding that Ultima be handed over. He accuses Ultima of practicing witchcraft that killed his daughter. The men leave without Ultima, but the threat remains.

Antonio begins attending catechism classes in order to be confirmed in the Catholic Church but begins to develop doubts about his proclaimed faith. He sees the healing power that Ultima finds in plants from the earth and learns about the mythological “golden carp” from his friends Samuel and Cico. Confusion enters Antonio’s mind as he debates his own spirituality and what it means to maintain his family honor.

As the book progresses, Tenorio becomes more determined than ever to kill Ultima and kills a man named Narciso in his quest. Tenorio nearly kills Antonio on several occasions and is blinded in one eye by Ultima’s protective owl. When his second daughter dies, Tenorio shoots the owl that belongs to Ultima and it leads to her death. Antonio asks for Ultima’s blessing before she dies and he makes peace with what has happened because he can tell that Ultima is at peace with her life ending.