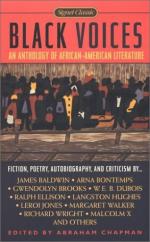 Gwendolyn Brooks
This Study Guide consists of approximately 25 pages of chapter summaries, quotes, character analysis, themes, and more - everything you need to sharpen your knowledge of Blacks.

Gwendolyn Brooks's collection Blacks presents a sampling of her wide-ranging work made up of poems and prose written during a period stretching from the 1940s through the mid-1980s. The lives of people in the black community are her primary subject matter, a topic that requires Brooks to document and comment on slavery, segregation, and social stigmas in terms of their lasting effects on black awareness and self understanding. Brooks's work thus illustrates the important idea of double consciousness.

The term "double consciousness" was coined in 1897 by W. E. B. DuBois, an African American civil rights activist and scholar, who wrote in The Souls of Black Folk:

After the Egyptian and Indian, the Greek and Roman, the Teuton and Mongolian, the Negro is a sort of seventh son, born with a veil, and gifted with second-sight in this American world,—a world which yields...

More summaries and resources for teaching or studying Blacks.