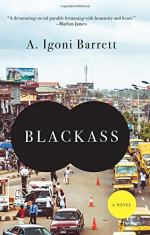 A. Igoni Barrett
This Study Guide consists of approximately 62 pages of chapter summaries, quotes, character analysis, themes, and more - everything you need to sharpen your knowledge of Blackass.

This detailed literature summary also contains Quotes and a Free Quiz on Blackass by A. Igoni Barrett.

The following version of this book was used to create this study guide: Barrett, A. Igoni. Blackass. Graywolf Press, 2015.

Furo Wariboko wakes up on the morning of a job interview and discovers that he has transformed into a white man. As he is adjusting to his new appearance, he walks towards his interview location, Haba! Nigeria ltd. He meets Arinze, who offers Furo a much more lucrative job than he was expecting. After accepting the job offer, Furo wanders the streets, homeless, until he meets Igoni and Syreeta at a mall. Once Igoni leaves, Syreeta offers Furo a massage at her house. Following their arrival at the apartment, Syreeta gives Furo the massage and Furo asks her if he can stay with her until his job starts. She agrees, and shortly afterwards she notices his black buttocks, which causes her to laugh at Furo. Throughout these events, Furo constantly struggles because he misses his family, and he is trying to adapt to his new lifestyle.

The novel now shifts to Igoni’s perspective. His interest in Furo led him to find information about him online. He discovers Tekena, Furo’s sister, on Twitter and asks her to meet him. Igoni then claims that he has also undergone a transformation, and the perspective of the novel shifts back to Furo.

Syreeta helps Furo acquire a new passport, and when Furo and Syreeta reunite at herhouse, they have sex for the first time. The next day, Syreeta introduces Furo to her friends, who are all married to white men with children. A couple of days pass, until Bola enters Syreeta’s apartment while Furo hides in his room. He gives Syreeta her allowance, then takes her out. Furo believes Syreeta is offering Bola sexual favours in exchange for money.

When Syreeta returns the following day, she takes Furo out to buy clothes. When they return, Furo reflects on his identity for a few days before concluding that he will change his name to Frank Whyte to suit his new appearance, and prepare for his first day of work, which begins the next day.

The perspective shifts back to Igoni, who has transformed into a woman and now refers to herself as Morpheus. She reflects on her transformation, and on her meeting with Tekena, and realizes that she wants to talk to Furo again.

It is now Furo’s first day as a marketing executive for Haba!. He makes a good impression, and he is introduced to the rest of the staff. Furo soon makes a name for himself. Competing companies keep offering Furo better paying jobs, but Furo stays loyal to Arinze, even though he believes that he deserves better. Furo eventually develops a romantic bond with Tosin, the receptionist, but it does not develop into anything more than mutual attraction. Arinze takes Furo to Abuja because he wants Furo’s help completing a large deal with Yuguda’s company. Once the deal is finished, Yuguda discreetly offers Furo a much better job in Abuja. Furo accepts, knowing that the job will help him get away from his old life forever.

When he returns to Lagos, Furo is making sure his affairs are in order before his departure. He tries to kiss Tosin, who rejects him and calls him selfish. Furo then goes to Syreeta’s house to tell her that he is leaving. Syreeta then tells Furo that she is pregnant with his child, so Furo lies to her, saying that he wants to marry her so she can move to Abuja with him. She accepts, and Furo leaves without saying goodbye.

Igoni reunites with Furo, and they spend the night talking about their transformations. When Igoni realizes how selfish Furo had become, he calls Furo’s family and gives them Furo’s location. The novel ends just before Furo answers the door as his mother arrives.

More summaries and resources for teaching or studying Blackass.