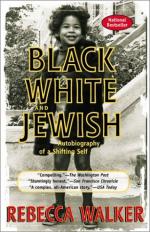 Black, White, and Jewish: Autobiography of a Shifting Self Summary & Study Guide

Black, White, and Jewish: Autobiography of a Shifting Self Summary & Study Guide Description

Black, White, and Jewish: Autobiography of a Shifting Self Summary & Study Guide includes comprehensive information and analysis to help you understand the book. This study guide contains the following sections:

This detailed literature summary also contains Topics for Discussion and a Free Quiz on Black, White, and Jewish: Autobiography of a Shifting Self by Rebecca Walker.

In this biography, Rebecca Walker tells her story of growing up as the daughter of Mississippi's first legal interracial marriage. In addition, her mother is well known writer, poet and playwright, Alice Walker.

Rebecca Walker's personal story draws the reader in from the beginning, as she describes life in Mississippi, starting with her first birthday. Then, the family moves to New York, where both of her parents continue their involvement in the civil rights movement. Walker writes about her relationship with her father's white, Jewish family, those that accept her and those that hold her at a safe distance. As a young girl, much of this separation fails to make sense. Walker fails to see her parents open-minded view in the world around her. Her parents, throughout the book, fail to prepare Walker for encounters with those people who continue to harbor bigoted views.

During Walker's childhood, her parents divorce. At first, they both live in the New York City area. Walker lives with her mother in a much simpler neighborhood than her father, now a successful mainstream lawyer. Soon her father remarries, this time to a white, Jewish woman. It is Walker's stepmother who helps her through many of the milestones of adolescence, including her first period. For many years, Walker feels close to her stepmother, even calling her "Mom". In her late teens, however, she begins to feel resentment towards her stepmother for the distance she feels, emotionally, between herself and her father.

At the beginning of Walker's middle school career, her mother moves to San Fransisco. Thus Walker begins two lives. She lives two years at a time with her mother, then two years with her father. She feels that every time she moves, she must sever all ties and develop a type of amnesia. Also, the friends she keeps become more dangerous. Walker finds vastly more acceptance in the projects and ghettos of both Brooklyn and San Fransisco. While staying with her father, she spends time with the Hispanic population, who appear closer to her skin color. The Hispanics refer to her as "mulatto". Her activities with them include drugs and wild parties where fights often break out. Once, a much older boyfriend learns of a drug dealer who allowed Walker to experiment with a potent, new drug. The drug dealer later ends up dead, and the murder remains unsolved.

In San Fransisco, Walker largely raised herself. Her relationship with her mother consists of notes and monies left on the dining room table. She frequently stays over at friends houses, sleeping with boys. She also travels all over town via the bus system, sometimes to smoke in Japantown. Walker starts being sexually active in the sixth grade. She also goes, with a friend, to Planned Parenthood to get birth control. She begins taking it before she gets her first period. At age fourteen, Walker goes with her mother and boyfriend to have an abortion.

After this incident, Walker enrolls in private school. She begins to thrive more academically. When Walker graduates from high school, her father comes to San Fransisco for the first time. The meeting between her parents is awkward. Walker states that, in her quest to find her identity, she refuses to wear one mask. She identifies with all oppressed cultures, whether they are her own are not.

Black, White, and Jewish: Autobiography of a Shifting Self from BookRags. (c)2022 BookRags, Inc. All rights reserved.