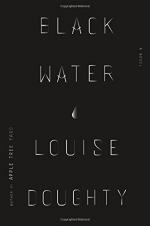 Louise Doughty
This Study Guide consists of approximately 36 pages of chapter summaries, quotes, character analysis, themes, and more - everything you need to sharpen your knowledge of Black Water.

Black Water opens in 1998 with John Harper in a remote part of Indonesia reflecting on his life while in hiding. He worked for a black ops organization for most of his life and is fearful that the organization is going to have him killed.

John meets Rita in a bar and they quickly begin an affair. He is surprised that he connects with Rita as quickly as he does. Rita does not look like the other women in his past, including his wife. John begins to learn that Rita’s past is complicated as well, including her distant relationship with her son.

The novel flashes back to John’s childhood. The only son of an alcoholic mother, John is born Nicholaas in an internment camp in Indonesia. John’s father, an Indonesian man, is beheaded by the Japanese during the war and John’s mother Anika, who is Dutch. Eventually, John and his mother make their way to Los Angeles. While in California, Anika falls in love with Michael, an African American man. They have a child named Bud, but Anika and Michael’s relationship soon turns sour. Anika leaves John and Bud with Michael’s parents.

Poppa, Michael’s father, takes John and Bud to a park and they hike to see a waterfall. Bud, only a toddler wants to get in the water, but Poppa tells him no. After Bud begs, Poppa relents and Bud splashes in the water, but a current takes him and Poppa and John are unable to rescue him. Anika, who travels back to the Netherlands, writes to Poppa, reclaiming custody of John.

As John enters adulthood, he joins the black ops company and begins his training. He is stationed in Indonesia and witnesses the horrors of the missions. He watches men tortured and killed to maintain his cover during his mission. The company is working to stop the spread of communism. Because John is mixed race and once lived in Indonesia, the company believes that he is good fit for the region.

The novel returns to 1998 as John and Rita grow closer. John believes he can be happy with Rita if he leaves his mission behind. First, he must figure out whether the company is trying to have him killed. He spends long nights in the hut, thinking that he hears footsteps on the roof, which turns out to be the patter of rain. He confides in Rita about how he has been forced to take leave from his company. He remembers traveling back to Los Angeles when he was a young man and seeing Poppa one last time. Poppa tells him that he regrets that his death will leave John all alone with the memory of what happened to Bud.

As John spends his last night in the hut, he is hopeful that he will be able to leave his previous life behind and begins anew with Rita.

More summaries and resources for teaching or studying Black Water.