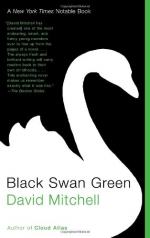 Mind you, if they knew Eliot Bolivar, who gets poems published in Black Swan Green Parish Magazine, was me, they’d gouge me to death behind the tennis courts with blunt woodwork tools and spray the Sex Pistols logo on my gravestone.
-- Narrator (January Man paragraph 35)

Importance: Even though he knew it was uncool, Jason wrote poems for his village’s parish magazine. He wrote under a false name hoping his fellow students would never find out he was a poet.

Games and sports aren’t about taking part or even about winning. Games and sports’re really about humiliating your enemies.
-- Narrator (January Man paragraph 42)

Importance: It was during a game of British Bulldog that Jason realized that boys played sports and games not to win but as an opportunity to humiliate the kids they didn’t like.

Then, where the faint path from the House in the Woods meets the main path to the lake, I heard a...
-- Narrator (January Man paragraph 53)