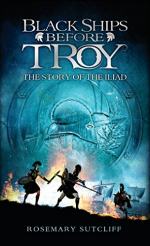 Rosemary Sutcliff
This Study Guide consists of approximately 38 pages of chapter summaries, quotes, character analysis, themes, and more - everything you need to sharpen your knowledge of Black Ships Before Troy.

This detailed literature summary also contains Quotes and a Free Quiz on Black Ships Before Troy by Rosemary Sutcliff.

The following version of this book was used to create the guide: Sutcliff, Rosemary. Black Ships Before Troy. Lester Publishing, 1993.

Sutcliff recounts an abridged version of the events of Homer’s The Iliad with a third-person omniscient narrator. In Ancient Greece, Athene, goddess of wisdom, Hera, queen of Gods, and Aphrodite, goddess of beauty quarrel over who is the fairest. King Priam of Troy has a son, Paris. Paris is foretold to ruin Troy, so Priam has him sent to be killed. Instead of being killed, he is taken in by a herdsman and raised in the woods. Once he is grown, the quarrelling Goddesses ask him who is the fairest. He says Aphrodite. She promises him the most beautiful wife.

Aphrodite sends Paris back to Troy where he is crowned Prince as his family, overjoyed at their reunion, forgets the prophecy. He hears of a beautiful Queen Helen, recently married to Greek King Menelaus. He goes to seek her out, and asks her to return to Troy with him. She agrees.

Menelaus, brother of Agamemnon who is the high King of Greece, gets all the Greek Kings to join Menelaus in declaring war with Troy due to loss of Helen. Greek ships sail to the walled city of Troy, and begin a battle which lasts ten years.

In the tenth year, Greek warrior Achilles gets into a fight with Agamemnon, after Agamemnon states claim on Achilles’s prized slave. Achilles is the son of a sea nymph, Thetis, who dipped him into the River Styx as a baby by the heel, making his entire body invulnerable to death except for his heel. In his anger, Achilles removes himself and his army from the battle.

Paris and Menelaus duel in single combat, but Aphrodite intervenes to save Paris. Paris is tended to in the palace, where Helen suffers due to feeling she caused this war. Hector, Paris’s heroic brother and leader of Trojan army, retrieves Paris to rejoin the battle.

The battle rages on, and the Greek warlords get Achilles’s friends to appeal to him, needing him to win the battle, but he refuses to join the fight, still angry.

Patroclus, Achilles’s best friend, sees that the Greeks are losing and asks to wear Achilles’s armor to battle to scare the Trojans into thinking Achilles has returned. Achilles agrees, and Patroclus leads the Greeks to push back the battle all the way to the Scaean Gate in Troy’s walls. Hector kills Patroclus and takes Achilles’s armor.

Achilles wants vengeance after hearing about Patroclus’s death and goes on a rampage, killing Hector in the Scaean gate. He ties Hector’s body to his chariot and drags him around the battle field for days. The gods send messengers to get Achilles to return the body, finding it dishonorable and angry with Achilles.

Odysseus, one of the greatest Greek warriors, dresses like a beggar to enter Troy. He finds Helen, who discovers his true identity, but spares his life as they are old friends. He promises her safety upon Greek victory. Odysseus goes to the temple of Athene and steals the Luck of Troy: a part of Athene’s shield which fell from heaven long ago and gives the Trojans power.

The Greeks feel powerful after stealing the Luck of Troy and push the army back to the Trojan Wall. Paris shoots an arrow from a high gate and God Apollo directs it to hit Achilles’s ankle, killing him in the Scaean Gate.

The Greeks decide they must use cunning to win the war. Odysseus has an idea: they will make a large wooden horse, and some men will hide in it. The rest will sail to the nearest island. The Trojans, seeing them flee will come out the walls, and find a Greek warrior who will pretend he was left behind. The warrior will say the Greeks left but left behind a horse for Athene to make up for the theft of the Luck of Troy. The Trojans will take the horse to her temple, believing they have won, and the warriors in the horse will wait until dark to ambush the city from within. The rest of the Greek army will return from the island, and join them to win the war.

Menelaus promises Odysseus anything he wants his plan works and the Greeks are victorious.

The plan is successful, and the Greeks burn the city of Troy. Menelaus looks for Helen to kill her and finds her with Odysseus, who uses Menelaus’s promise to spare her life. Menelaus agrees and remembers his love for her. The Greeks sail back to Greece, having won the war, with Helen once again Menelaus’s Queen

More summaries and resources for teaching or studying Black Ships Before Troy.