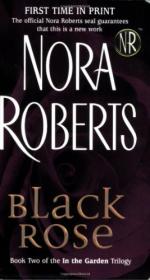 Nora Roberts
This Study Guide consists of approximately 26 pages of chapter summaries, quotes, character analysis, themes, and more - everything you need to sharpen your knowledge of Black Rose.

Black Rose by Nora Roberts is the second book in the In the Garden trilogy. The book continues where Blue Dahlia left off. Stella and Logan are preparing for their wedding. Roz Harper's business continues to grow and thrive. Amelia, the Harper Bride, continues to make appearances and her story begins to unfold, revealing deep dark secrets of the Harper family and of Roz's true heritage.

The story opens in Memphis Tennessee in 1892. Amelia Connor stands in front of a mirror. She notices that she has grown pale and sallow. Her body is no longer a body of youth. Motherhood and neglect have taken their toll. Amelia tries to figure out how to regain the affections of her lover, Reginald Harper. Reginald is a wealthy and powerful man with whom she had been involved for some time. Since the birth of their child, Reginald has been absent. No amount of begging or pleading could make Reginald appear at Amelia's door. One night Reginald arrives. Amelia begs for Reginald to resume their relationship. Reginald talks about their stillborn baby. Amelia knows it is a lie. She had given birth to a healthy baby boy. The baby had been stolen by Reginald to be raised by Reginald and his wife. Reginald is scornful toward Amelia. Amelia continues to beg for Reginald's love. Reginald tells Amelia that her only purpose had been to give him an heir. She had been well paid for her services. Amelia is on the verge of madness.

Amelia hangs herself in Harper House and cannot rest until she has been avenged. Amelia has appeared to small children over the years, singing lullabies. It is not until Black Rose that Amelia begins to act out in anger over the treatment from her lover.

The story focuses mostly on the life of Roz Harper, the mistress of Harper House. Roz runs In the Garden, a successful nursery, with her son Harper and several "adopted" family members. Roz has had some difficulties in the past, particularly her second husband Bryce, who continues to plague her with all types of fraud, mischief, vandalism, and lies.

Roz hires Dr. Mitch Carnegie to delve into the Harper family history and to finally identify the Harper Bride. Mitch will write a book about the history when he is finished. During Mitch's work at Harper House, he and Roz become lovers which enrages Amelia.

The reader gets to take an inside look into Memphis society through the eyes of Roz, who only participates because of duty. Roz is much more interested in her family and life as a businesswoman. Amelia causes Roz to take a closer look at her involvement with men, including Bryce and Mitch, and to accept that she deserves love in her life.

The story stops after Stella and Logan's wedding and Roz's final confrontation with Bryce. The story of Amelia is left to be solved in the next book.

More summaries and resources for teaching or studying Black Rose.