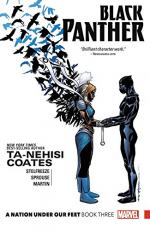 Ta-Nehisi Coates
This Study Guide consists of approximately 29 pages of chapter summaries, quotes, character analysis, themes, and more - everything you need to sharpen your knowledge of Black Panther.

Black Panther: A Nation Under Our Feet (Book 3) Summary & Study Guide includes comprehensive information and analysis to help you understand the book. This study guide contains the following sections:

This detailed literature summary also contains Quotes and a Free Quiz on Black Panther: A Nation Under Our Feet (Book 3) by Ta-Nehisi Coates.

The following version of this book was used to create this study guide: Coates, Ta-Nehisi. Black Panther: A Nation Under Our Feet (Book 3). Marvel Inc, 2016. Version 1.

Picking up immediately after where Book 2 ended, Book 3 finds Shuri's soul returned from The Djalia: Plane of Wakandan memory empowered with the collective memories and history of Wakanda. This includes new super-natural abilities taken from Wakandan lore, such as turning her skin to stone and transforming into a flock of birds. She now shares leadership responsibilities with her brother, T'Challa. Shuri and T'Challa begin a very calculated approach to quashing The People's rebellion. First, Shuri directly approaches Ayo and Aneka to discuss The Midnight Angels' role in the turmoil. Aneka and Ayo are shocked to see their once thought dead Queen appearing in front of them. Shuri admonishes Aneka for a broadcast in which she formally rejected T'Challa as her King. Shuri admits that while The People may not be able to invade the capital on their own strength, if the government's attention is continually split between keeping checks on The People and The Midnight Angels then Wakanda will surely fall to The People. After Shuri leaves, Ayo proclaims she feels a new hope at seeing Shuri's return to the physical world and could possibly admit complete separation from the Wakandan government may not be the only option. Aneka remains reticent to make this leap.

Upon returning from her encounter with The Midnight Angels, Shuri tells T'Challa, Hodari, Akili, and Eden that Zenzi's power is growing stronger than ever before. Her ability to amplify the rage and desire for hope in members of The People have turned them from simple soldiers to weaponized killing machines. She says they must have some sort of counter to this super-natural emotional appeal. T'Challa agrees and says he knows exactly what to do. T'Challa then visits Birnin Azzaria, The Learned City, to meet with Changamire, the philosopher whose teachings are the basis for Tetu's rebellion. They discuss at great length the implications of Changamire's teachings but T'Challa admits even though Tetu has used them to justify violent means there is truth in them. T'Challa brings Changamire back to The Golden City where they plan for Changamire to act as the moral counter to Tetu, Zenzi, and their followers. With Changamire's role in place, T'Challa, Shuri, Akili, and Eden prepare for what hopes to be the final battle with The People. While this happens, Aneka has a brief call with Tetu, where she formally rejects Tetu's request for The Midnight Angels' aid in their attack on The Golden City.

At the gates of the Golden City, T'Challa, Shuri, and their allies do battle with The People. They are soon overwhelmed by the enhanced soldiers of The People and retreat within the walls of The Golden City. Once there, Changamire begins to give a speech that implores Wakandans to see progress for their nation and increased rights for its citizens does not necessarily involve violence or the complete dismantling of the current governmental system. A bright flash of light frees The People's army from Zenzi's control momentarily, just in time to witness Changamire's speech. The speech shifts the ideas of many of The People's soldiers, which makes it more difficult for Zenzi to control them. Tetu has these soldiers killed and enters The Golden City with his four remaining followers, who have been transformed into goblin-like beasts by Zenzi, fueled by heightened rage.

Once they enter the city, the remaining members of The People wreak havoc until they come to a forest. Suddenly, T'Challa appears with Shuri, Akili, Eden, and a panoply of spirits of warriors from Wakanda's past which T'Challa had summoned in The Necropolis. The united forces overwhelm The People quickly and Tetu is captured alive. Zenzi escapes and is transported to an unknown location by Zeke Stane and The Vanisher. After the battle, Shuri holds a meeting with the women of The Midnight Angels to begin to decide the future of Wakanda.

Shuri and Ramonda then visit Ramonda, Shuri's mother and T'Challa's step-mother, after she has awakened from an extended coma. T'Challa tells his mother The People have been defeated, at least for now, and the Wakandan government will be restructuring. He says there will be a summit in the near future where representatives from every region of Wakanda will assemble to write its new constitution. Ramonda is hesitant to endorse the idea, but T'Challa assures her he will still be King and Black Panther, but he will preside only as a representative of Wakanda, not a firm ruler. He now knows Wakanda needs to be given a chance to govern itself as a collective unit. Eden tells T'Challa he has decided to stay in Wakanda for the time being, considering it to be a second home. T'Challa thanks Eden for everything he has done and walks through one of his portals. T'Challa arrives in the office of Ororo Munroe, his ex-wife, and greets her hello.

More summaries and resources for teaching or studying Black Panther: A Nation Under Our Feet (Book 3).

Black Panther: A Nation Under Our Feet (Book 3) from BookRags. (c)2022 BookRags, Inc. All rights reserved.