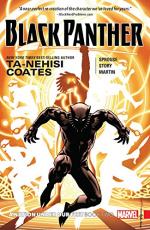 Ta-Nehisi Coates
This Study Guide consists of approximately 29 pages of chapter summaries, quotes, character analysis, themes, and more - everything you need to sharpen your knowledge of Black Panther.

Black Panther: A Nation Under Our Feet (Book 2) Summary & Study Guide includes comprehensive information and analysis to help you understand the book. This study guide contains the following sections:

This detailed literature summary also contains Quotes and a Free Quiz on Black Panther: A Nation Under Our Feet (Book 2) by Ta-Nehisi Coates.

The following version of this book was used to create this study guide: Coates, Ta-Nehisi. Black Panther: A Nation Under our Feet (Book Two). Marvel Worldwide Inc, 2016. Version 1.

In The Golden City, capital of Wakanda, T'Challa is still reeling from Zeke Stane's attack which left his step-mother, Ramonda, severely injured. He plans a raid on the base of Tetu's rebellion, now referring to themselves as "The People." T'Challa has recruited a friend from his days in the Avengers, Eden aka Manifold, to help with an upcoming operation. Eden has the ability to create portals to transport anyone great distances and sends T'Challa and some of his War Dogs to the base of The People. T'Challa mercilessly beats Tetu's soldiers in a blind rage, having to be restrained by his Lieutenant, Akili, from killing them. In the base T'Challa and his allies discover soldiers are having bombs embedded into their chests so they can act as suicide bombers if necessary. Eden opens a portal and T'Challa takes the bomb-equipped soldiers as prisoners.

At Tgai Ngao, T'Challa thanks Eden and sends him home. He attends a meeting of an assembled council of representatives from nations who have endured rebellions similar to Wakanda's current situation. T'Challa does not want to attend the meeting but goes at the behest of Hodari, his chief advisor. The men offer solutions while T'Challa politely listens but shows no interest in taking up any of their suggestions. One representative, Jorick Kroawl, says he knows of the most effective tactic to suppressing a rebellion and T'Challa asks him to tell.

In a laboratory T'Challa interrogates one of the soldiers captured during the raid on The People. The soldier's name is Mwabena Ware and his brother was killed years prior by war lords. T'Challa attempts to appeal to Mwabena as a fellow Wakandan to show him Tetu's methods are not good for the nation. He initially rebukes T'Challa, but remembering his brother's unjust death, he decides to aid his King. Meanwhile in an unnamed location, Jorick Kroawl has a meeting with Zeke Stane, Tetu, and Zenzi regarding his recent session with T'Challa. Stane secretly recorded the council meeting, showing Kroawl's method for suppressing a rebellion is to kill village Chieftains on live television one by one until the rebellion surrenders. T'Challa, of course, immediately rejected this idea but Stane circulates the clip out of context to all of Wakanda. It makes people all around Wakanda believe this is what T'Challa plans to do. After taking the recording, Stane kills Mr. Kroawl.

At the Necropolis, T'Challa video conferences with Tony Stark, aka Iron Man, who has fought Stane in the past. Stark offers to come to T'Challa's aid but his offer is refused. T'Challa then injects himself with nanites, microscopic technology that Dr. Doom had previously used in an attempted coup against the Wakandan government. These nanites enable whatever a person sees and hears to be recorded and broadcast to any location. He then has Eden create another portal to the Base of the People where he feigns combat but allows himself to be captured. He is brought to Stane who reveals his plan is to unseat T'Challa and become King of Wakanda. He hopes to exploit the nation's vibranium supply and rule the country as a dictator. Using the nanites coursing through T'Challa's blood Stane's words are sent back to Hodari at Tgai Ngao. He intends to broadcast this all Wakandan citizens in an attempt to expose who the real villain is.

Once the recording of Stane is made, Hodari sends "The Crew" to save T'Challa. The Crew is made up of Eden, Luke Cage, Misty Knight, and Storm (all black superheroes). T'Challa had recruited them to help specifically with this mission. After a harrowing fight, T'Challa and The Crew are able to defeat Stane's henchmen. They receive critical help from Mwabena, who was working undercover on behalf of T'Challa. Though Stane escapes, T'Challa feels confident he has the ammunition he needs to take Stane down. He thanks the members of The Crew and Eden takes them all home. Meanwhile in a jungle hideout, Changamire walks to meet with Tetu and Zenzi. He wants to make one last attempt to show Tetu that he is misappropriating the lessons taught to him in school. Tetu is not receptive and intends to continue his rebellion. Zenzi ask Changamire to join their cause but he quickly refuses.

Simultaneous to the main plot, Shuri is still in The Djalia: Plane of Wakandan memory with The Griot. She trains with The Griot, who has taken the physical form of her mother Ramonda, and learns the true meaning of stories from Wakanda's past. The lessons learned from these stories are symbolic of what must be done to save Wakanda. Gradually, The Griot stops telling stories and allows Shuri to tell her own. This leads to Shuri becoming fully enlightened to Wakanda's history and she is bestowed with the title of Aja-Adanna, Keeper of Wakandan Lore.

After T'Challa sends The Crew home, Eden secretly returns alone. T'Challa has built a machine in his lab to amplify Eden's powers in order to find Shuri. Her scent has disappeared from her body leading T'Challa to realize her soul is on a different plane of existence. Though he does not know if he and Eden will survive this trip, T'Challa knows Shuri is critical to uniting Wakanda. They are successful and Shuri is resurrected and ready for battle.

Aneka and Ayo, The Midnight Angels, are featured sparingly in Book 2. They are currently living in a base in the Jabari-Lands in Northern Wakanda. They still intend to protect the woman of Wakanda from the oppressive patriarchy present in Wakanda. At one point T’Challa sends War Dogs to capture the dissidents but they are saved by Tetu and Zenzi. The Midnight Angels still have an uneasy alliance with The People. Aneka and Ayo are happy for the assistance but are unsure if The People and its leaders can be trusted.

More summaries and resources for teaching or studying Black Panther: A Nation Under Our Feet (Book 2).

Black Panther: A Nation Under Our Feet (Book 2) from BookRags. (c)2022 BookRags, Inc. All rights reserved.