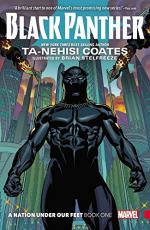 Black Panther: A Nation Under Our Feet (Book 1) Summary & Study Guide includes comprehensive information and analysis to help you understand the book. This study guide contains the following sections:

This detailed literature summary also contains Quotes and a Free Quiz on Black Panther: A Nation Under Our Feet (Book 1) by Ta-Nehisi Coates.

T'Challa is the current King of the fictional nation of Wakanda and holds the ceremonial title of Black Panther, who is sworn to protect Wakanda from all threats. He has recently spent time away from his throne fighting alongside The Avengers, and in his absence several attacks and disasters have crippled his homeland. His sister Shuri, who was serving as Queen and Black Panther in T'Challa's absence, was killed in an attack prompting T'Challa to return home. Upon his arrival, he visits The Great Mound, cite of the largest vibranium (a highly sought after, indestructible metal) mine in the world, and is attacked by the miners. The miners are under the control of a woman named Zenzi who possesses supernatural abilities. Startled and confused, T'Challa returns to the capital of Wakanda, The Golden City, to consult with his advisors and his step-mother, Ramonda.

It is revealed Zenzi is working for a man named Tetu, who is assembling an army with the intent of overthrowing the Wakandan government. He wants to recreate the nation as one run by the people, not by an independently operating monarch. T'Challa tracks Zenzi to a compound in the southern region of Wakanda, near the border of Niganda (a fictional neighboring nation). He fights his way in and finds Zenzi seemingly holding men, women, and children hostage. Zenzi uses her powers to force T'Challa to confront his greatest fear of not measuring up to the standard set by Black Panther's before him. When T'Challa regains consciousness Zenzi has escaped and he disposes of multiple guards. The people who T'Challa assumed to be prisoners claim they were there on their own volition and were being provided for.

In a brief sequence, it is revealed Tetu is drawing on a mystical energy from the Alkama Fields, also located near the Nigandan border. Meanwhile, it is discovered by Ramonda that Tetu was a former student of a philosophy scholar named Changamire known for his extremist views. Changamire was previously Ramonda's tutor in her youth but he was fired from his position for his views on the need to challenge the supremacy of the monarchy, which was viewed as a threat. While Changamire is not directly involved with Tetu any longer, it is clear Tetu is basing his rebellion on the lessons Changamire taught him. T'Challa tracks Zenzi back to the Nigandan border where he critically injures her. Once this happens Tetu summons the mystical force from the Alkama Fields and controls the roots of trees to restrain T'Challa and his soldiers while Tetu and Zenzi escapes. Returning to The Golden City, Ramonda tells T'Challa in order to effectively lead he must not only be the protector of Wakanda, he must also be a citizen of it. He must give himself to his country and have them accept him for who he is, not simply because he owns the birthright of the Black Panther. This prompts T'Challa to leave the palace and interact with the citizens of Wakanda.

Tetu is revealed to be working with Zeke Stane, an American weapons manufacturer and dealer. Stane's motivations are left unclear, but it is made explicit he is funding and pushing forward Tetu's rebellion. Tetu is pleased with the status of the rebellion but Stane wants to expedite things. He detonates a bomb where T'Challa is visiting with his people. The bomb kills and injures many, including critically wounding Ramonda. After this T'Challa declares war and is ready to protect Wakanda alongside its people at any cost.

Simultaneously to the main storyline, a second story unfolds about Ayo and Aneka. They are former members of the Dora Milaje, the King's personal bodyguards and militia. Aneka is a former commander in the Dora Milaje who stands accused of assassinating a village Chieftain. Even though Aneka did this because the Chieftain was assaulting the women in the village Ramonda still upholds her death sentence. Ayo, a younger Dora Milaje member and Aneka's lover, steals an experimental suit of armor called "The Midnight Angel" and breaks Aneka out of prison. Aneka and Ayo, both donned with the Midnight Angel armor, decide to make it their mission to rescue and save the citizens of Wakanda who have been perceived to be forgotten by their King. Ayo and Aneka then liberate a series of villages under the control of Lord Mandla, a war lord who wears a Gorilla themed suit of armor and refers to himself as "Man-Ape." After saving these people they are approached by Tetu, who wishes to join forces to overthrow the T’Challa. While Aneka agrees they share a common enemy, they are not convinced Tetu is someone they wish to work with.

A third, short, narrative involves T'Challa's sister, Shuri. Since Shuri's death, her soulless body has been kept in a state of suspended animation at the Necropolis, burial site for all former Black Panthers. T'Challa is desperately trying to resuscitate her. It is revealed her soul is currently residing on The Djalia: The Plane of Wakandan Memory. There she meets the Griot, who takes the form of Shuri's mother Ramonda. The Griot tells Shuri no one in the living world is aware of this place, but it is there she will be able to tap into the greatest weapon of all: the memories of Wakanda.

Black Panther: A Nation Under Our Feet (Book 1) from BookRags. (c)2022 BookRags, Inc. All rights reserved.