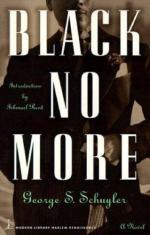 George Schuyler
This Study Guide consists of approximately 47 pages of chapter summaries, quotes, character analysis, themes, and more - everything you need to sharpen your knowledge of Black No More.

This detailed literature summary also contains Topics for Discussion and a Free Quiz on Black No More by George Schuyler.

Black No More by George Schuyler is a satirical novel, published in 1931, that looks at the United State's race problem by considering what would happen if black people could be turned white. This hilarious and relevant story follows Max Disher, who undergoes a new scientific transformation and becomes a white man named Matthew Fisher and a leader in a white supremacist group. Also invested in the implications of this transformation are several militant organizations and interest groups, all of whom are hypocritical opportunists and all of whom have much to gain or lose when it comes to racial identity and politics.

After being rejected by a pretty white girl from Atlanta, black Harlem resident Max Disher decides to become white. He is the first to undergo Dr. Crookman's treatment at the Black-No-More sanitarium. Crookman's company thrives, though it causes anger among white supremacists, and thousands of black people spend all their money on the treatment, leaving their black neighborhoods and moving into white society.

In Atlanta, Max, now Matthew Fisher, joins forces with Rev. Henry Givens, who is the leader of a white supremacist group called the Knights of Nordica. Rev. Givens' daughter, Helen, is the same pretty white girl who rejected Matthew, and the two marry. In order to make money, Matthew denounces the work of Black-No-More. Black militant organizations, faced with decreased funding, also call for the end of Crookman's company. One day, Bunny shows up in Atlanta as a white man, and Matthew hires him as his assistant.

For a steep profit, Matthew stops labor strikes all over the South by keeping low-income workers focused on white supremacy and the evil of Black-No-More. Nonetheless, soon there are only a couple thousand black Americans left in the country, and Southern politicians worry that they will lose their Democratic seats. Matthew works to control the upcoming election by uniting with the white supremacist group, the Anglo-Saxon Association of America. Mr. Snobbcraft, its leader, privately commissions Dr. Buggerie to collect genealogical data about the nonwhite ancestry of millions of people to prove the purity of top Anglo-Saxon leaders.

The Democratic Party nominates Rev. Givens and Snobbcraft as its presidential and vice-presidential candidates, and the Republican Party nominates President Goosie for another term. The campaign grows bitter, and a hospital for women delivering biracial children is even burned down.

Right before the election, Buggerie informs Snobbcraft that his genealogical data proves that both of them—and many other white supremacists—have nonwhite ancestry. The two men realize that the data has been stolen by the Republican Party. Meanwhile, Helen delivers a dark-skinned child, and the Givens find out about their own their nonwhite ancestry as mobs break out in reaction to Buggerie's data. Matthew announces that he is black, and he and Helen and the Givens and Bunny escape the country to Mexico.

Four years later, Dr. Crookman announces that those blacks who underwent his treatment are now more white than natural whites. Prejudice develops against those with light skin, and it becomes popular to have a darker skin tone. Both whitened blacks and natural whites begin staining their skin.

More summaries and resources for teaching or studying Black No More.