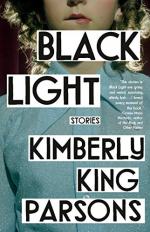 Kimberly King Parsons
This Study Guide consists of approximately 48 pages of chapter summaries, quotes, character analysis, themes, and more - everything you need to sharpen your knowledge of Black Light.

Black Light is a collection of 12 short stories. The first story, “Guts,” is narrated by a woman named Sheila who is dating a med student named Tim. Sheila becomes increasingly obsessed with bodies and diseases as she learns more about Tim's work, and she is particularly fixated on her own, as she is extremely insecure about her weight. These insecurities ultimately drive Sheila to drink excessively. In the story's climax, she shows up at Tim's hospital in a drunken state of distress, and he calms her down by lovingly touching and naming each part of her body.

“In Our Circle” is a brief story in which an unnamed narrator recalls his brief stint in a mental hospital. The hospital offered an art class, where a very calm and kind instructor helped the men channel their feelings into clay creations. When the narrator left the hospital, he bought model clay so he could continue this therapeutic practice on his own.

In “Glow Hunter,” a teenager named Sara drives around rural Texas looking for psychedelic mushrooms with her friend Bo, with whom she is romantically infatuated. The two girls recently had a sexual encounter, and Sara is desperately hoping it happens again. Throughout the story, Sara narrates every detail of Bo's personality and behavior, analyzing her every move for clues about the future of their relationship. Eventually they find the mushrooms and eat them, and then have sex in the backseat of Bo's car.

In “Foxes,” an unnamed narrator listens to her young daughter tell a story about a brave knight fighting his way through various enemies in a forest. While listening, her mother drinks sherry and recalls the details of her toxic relationship with the girl's father, which has recently ended in divorce. Through her memories, the reader sees that both parties were at fault, as they drove each other to drink heavily and exhibited unstable behavior. In the daughter's story, the knight defeats an “inky shape” (87) that stands in the way of his reunion with his child, making it clear that this is an allegory about the collapse of her parents' marriage and the girl's yearning for her father.

“The Soft No” is about two children living with a mentally ill mother whose attitude and behavior are entirely unpredictable. The siblings play outside with their friends, and would like to invite them back to their home, but they know they must first check to see if their mother is well enough.

In “We Don't Come Natural to It,” an unnamed narrator chronicles her toxic friendship with a coworker named Suki. Both women suffer from anorexia, and encourage each other in an ongoing mission to be as thin as humanly possible. It is strongly implied that the narrator is partially motivated by her romantic feelings for Suki, who has a boyfriend named Russ. At the end of the story, Russ takes the two women out to a barbecue restaurant, and the narrator is appalled as she watches Suki eat from his plate (breaking their pact of mutual starvation). She gets drunk on bourbon and returns home, only to find herself locked out of her apartment building.

In “The Light Will Pour in,” an unnamed narrator recalls driving across the country with his much younger girlfriend, Trish. The two met in church, where Trish was a singer in the choir and the narrator attended with his wife and child. After they ran away together, the narrator realized Trish was not the woman he thought she was, and the two fought continuously, leaving bruises and scratch marks on each other's bodies. Eventually, they settled down in a small Texas town, where Trish became an alcoholic and the narrator continued to regret initiating the relationship.

“Into the Fold” is set in a girls' boarding school, where narrator Kittredge King complains about new student Eloise Sheen and her constant bragging and weepy homesickness. When Kittredge's favorite horse at the school's stable dies, she lashes out at Eloise, telling her that everyone hates her, but Eloise responds by handing Kittredge a note written by one of the other girls stating that no one likes Kittredge because she is a “weirdo” (139).

“Black Light” is narrated by a teenager who has recently been jilted by her ex-girlfriend, who became a born again Christian. The narrator, who is struggling to fully accept her queer sexuality, is distressed about the end of this relationship, and in particular she is hurt that it seems to have been a passing phase for her ex. Her anger and sadness cause her to follow her ex in her car while she is out running, and eventually to show her friends and her brother a nude photo she took of her ex. At the end of the story, the narrator is concerned that she will always be alone and lonely.

“Fiddlebacks” is narrated by a young girl living in Texas with her older brother and sister and their mother. The children are on a mission to find a Fiddleback spider, and the narrator describes the many ways her sister is changing as she transitions from childhood to young adulthood. At the end of the story, on another spider-hunting journey, the siblings discover their mother and her boyfriend having sex in his car, and the narrator realizes that this act is directly connected to the changes she has observed in her sister.

In “Starlite,” two coworkers, Jill and Rick, take off work for the day and check into a motel, where they proceed to snort an excessive amount of cocaine. They are engaged in an emotional affair, and Jill is somewhat disappointed Rick does not try to instigate a sexual relationship. She is drawn to Rick because he is so different from her husband, and she seems to be using this afternoon as a means to escape her ordinary, middle-aged, humdrum existence. At the end of the story, Jill fixes her hair and clothes and prepares to return home and pretend as though nothing out of the ordinary has happened.