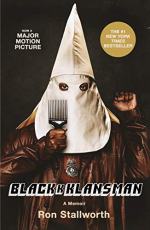 Ron Stallworth
This Study Guide consists of approximately 57 pages of chapter summaries, quotes, character analysis, themes, and more - everything you need to sharpen your knowledge of Black Klansman.

Ron Stallworth’s investigation into the Ku Klux Klan in Colorado began with a response to a classified advertisement published in a local Colorado Springs newspaper. Stallworth, a black police detective, responded to the advertisement asking for information, and received a call from a local KKK organizer about becoming a Klansman.

When Stallworth was in high school he wanted to become a P.E. teacher, but became a cadet with the Colorado Springs Police Department (CSPD) in order to help pay for college. After serving as a cadet, Stallworth became a police officer.

After a few short years as a uniformed police officer, Stallworth was called upon to be an undercover officer to attend a speech being given by Black Panther Party leader Stokely Carmichael. Shortly thereafter, Stallworth became an undercover detective in the Intelligence Unit.

Chuck, posed as Ron, meets with the local KKK chapter and begins the process to become a member. While the membership process is underway, Ron ends up calling and befriending David Duke, the national president and Grand Wizard of the KKK. Ron learns about Duke’s planned visit to Colorado and builds a rapport with him to learn as much as possible about Duke, the visit, and the workings of the KKK.

The local chapter of the KKK is working to expand its membership, so Chuck (and Ron) ‘recruit’ another detective—Jimmy—to join the KKK so that they can have two undercover agents inside the KKK. Chuck and Jimmy are both initiated into the KKK by Duke when Duke comes to visit Colorado Springs. During Duke’s visit, Stallworth is assigned to be Duke’s personal security while Duke is in Colorado Springs. Stallworth tricks Duke and a State KKK organizer into getting a picture with him, in which Stallworth puts his arms around the two Klansmen.

Stallworth uses his inside knowledge of he KKK’s plans to prevent multiple cross burnings in Colorado Springs. Shortly thereafter, the chief of police shuts down the CSPD’s investigation into the KKK. That very night a burning cross was found in front of a black night club in Colorado Springs that was holding a fundraiser.

While short, Stallworth’s investigation provided meaningful information to law enforcement agencies and civil rights groups across the country, and prevented acts of terrorism.