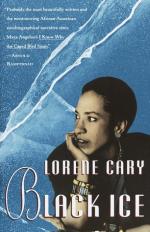 Lorene Cary
This Study Guide consists of approximately 31 pages of chapter summaries, quotes, character analysis, themes, and more - everything you need to sharpen your knowledge of Black Ice.

This detailed literature summary also contains Topics for Discussion and a Free Quiz on Black Ice by Lorene Cary.

Black Ice by Lorene Carey focuses on Lorene, a black high school student. She transfers from a school in a black suburb of Philadelphia to a prestigious, all-white prep school in New Hampshire. Lorene discusses how she maintains her black identity at St. Paul's and why she feels left out.

The book opens with a chapter entitled June 1989. Lorene Carey has graduated from St. Paul's School 15 years ago. She has also been a teacher at St. Paul's and is now ending her term as a trustee. She is at the graduation for the class of 1989 and watches the black and Hispanic kids graduate. She acknowledges it is a different experience for these kids than she had.

In the following chapters, Lorene goes back in time and discusses her experiences gaining admission and her two years at St. Paul's. Lorene hears that St. Paul's recruits black girl students. She applies and is accepted to the class of 1974. She is scared of leaving her familiar surroundings of black people, but she wants this experience, so she goes.

At St. Paul's School, she immediately befriends the other black students. They form a group called Afro-Am, which is later called the Third World Group. The black students tend to stick with one another. The school has strict rules, such as assigned seating at dinner, a mandatory sports requirement, and other formalities. Lorene holds onto her black identity via her black friends. When she interacts with the white girls, she finds them prejudiced, stupid and clones of one another.

She throws herself into school her senior year. She performs in choir and a play. She is vice president of the school. She receives excellent grades, except for one class, calculus, which she fails twice. She applies to Princeton and University of Pennsylvania. She even dates, but realizes she should not trust men.

At her graduation, Lorene realizes she has not loved St. Paul's enough. She cannot wait to graduate, but now that the day is here, she realizes she can never do her St. Paul's experience over again. She receives a Rector's Award, but is not satisfied with it because it is not the highest award. She feels it is a consolation prize. Her family is proud and says an experience like this does not happen in the black community. Lorene vows to do better next year at UPenn.

The book ends where it begins: with a chapter entitled June 1989. Lorene is married to a white man and has a young daughter. She wants to take her daughter out of black society where blacks are prejudiced against each other. She wants her children to skate on black ice, or have hope for the future.

More summaries and resources for teaching or studying Black Ice.