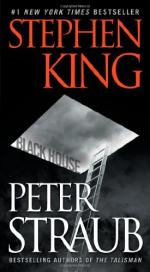 Stephen King
This Study Guide consists of approximately 41 pages of chapter summaries, quotes, character analysis, themes, and more - everything you need to sharpen your knowledge of Black House.

This detailed literature summary also contains Topics for Discussion and a Free Quiz on Black House: A Novel by Stephen King.

The Black House is a composite by Steven King and Peter Straub. The Black House holds the entrance from Jack Sawyer's world to a parallel universe called the Territories. Jack must unlock memories of his past while trying to save the future of both worlds.

Dale Gilbertson is the police chief in the town of French Landing, Wisconsin. Dale Gilbertson is investigating the kidnapping and murders of several local children but is in over his head. He asks his friend, Jack Sawyer, a former L.A.P.D detective, to help him with the case. Jack is reluctant at first, having retired early believing he was having a mental break down due to the stress of the job. The murderer has been dubbed the Fisherman because of the likeness between the current murders and some that happened in the nineteen-twenties.

Jack is friends with Dale Gilbertson's blind uncle Henry. Henry Leyden is a local radio personality. Henry encourages Jack to help with the investigation to help calm the town if nothing else. Jack receives a package from the killer that has a shoe with a foot still inside belonging to a little girl named Irma with a note to Jack telling him where to find the body. Dale soon has the investigation taken away from him by the state police but continues to investigate with Jack's help along with a local biker gang, the Thunder Five. The leader of the Thunder Five, Beezer, lost his daughter to the Fisherman.

A boy in the town, Tyler Marshal, is kidnapped and his mother is taken to an psychiatric hospital. Jack soon finds out that Tyler is a breaker and is wanted by a evil being called the Crimson King. Jack begins to remember his past and with the help of his friends finds the truth of the story. Henry Leyden is helping Jack and Dale with the case when he is killed by the Fisherman but not before leaving a message to Jack as to the identity of the Fisherman.

Jack, Beezer, Dale and Doc, another member of the Thunder Five, head to the Black House to save Tyler and stop the evil that wants to destroy all the worlds that exist. Once they are in the Black House they are able to find Tyler, who has already killed the Fisherman, also known as Charles Burnside. Jack kills Mr. Munshun, the one that sent Charles Burnside to kill the children. With Mr. Munshun dead Tyler destroys the machine that the Crimson King had constructed to destroy all worlds. Jack returns to his world with Beezer, Doc, and Dale but is shot by the wife of a man that Jack sent to prison earlier in his career. A friend of Jacks from the Territories, Speedy, is able to take Jack to the Territories where Jack is able to heal from the mortal wounds he received but is never again able to live in his own world without the wounds returning in a matter of days.

More summaries and resources for teaching or studying Black House: A Novel.