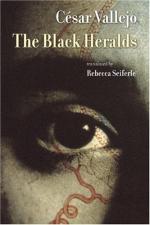 Introduction & Overview of The Black Heralds

César Vallejo
This Study Guide consists of approximately 28 pages of chapter summaries, quotes, character analysis, themes, and more - everything you need to sharpen your knowledge of The Black Heralds.

In the early 2000s, César Vallejo was considered Peru’s greatest poet, and the first line of “The Black Heralds” was said to be known by every Peruvian. Written after his move to Lima from a country village in 1916, the poem was included in a collection to be published in 1918, but Vallejo waited to issue the book until Abraham Valdelomar, an avant-garde writer, could add an introduction. However, Valdelomar died suddenly, so Vallejo released the book in 1919. There has been a confusion about the date of publication ever since. The collection was praised by Vallejo’s own artistic community; however, there were few sales and few reviews. The public was accustomed to modernismo and symbolism in verse, not Vallejo’s emotional and social outcry.

As time would show, The Black Heralds was actually the most traditional of Vallejo’s works, a blend of modernistic influences and the unique style of structure and language that he developed even more in later works. Nonetheless, the basic themes addressed in The Black Heralds remained important elements in all of his poetry: suffering, compassion, and the various components of existential anguish. All of these elements find expression in the title poem. “The Black Heralds” opens the collection and sets a tone for the rest of the book of bitter sentiments and blasphemous rebellion, as well as a compassionate understanding of suffering. Although his first book of poetry, The Black Heralds was the last of Vallejo’s works to be translated into English. Two later publications of the title poem can be found: in the 1990 English edition of Los Heraldos Negros, the translation by Kathleen Ross and Richard Schaaf; and in the 2006 collection The Complete Poetry of Cesar Vallejo, the translation by Clayton Eshleman.

More summaries and resources for teaching or studying The Black Heralds.