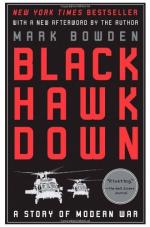 Mark Bowden
This Study Guide consists of approximately 27 pages of chapter summaries, quotes, character analysis, themes, and more - everything you need to sharpen your knowledge of Black Hawk Down.

Black Hawk Down: A Story of Modern War Summary & Study Guide includes comprehensive information and analysis to help you understand the book. This study guide contains the following sections:

This detailed literature summary also contains Topics for Discussion and a Free Quiz on Black Hawk Down: A Story of Modern War by Mark Bowden.

Black Hawk Down: A Story of Modern Warfare is a non-fiction book by journalist Mark Bowden. Black Hawk Down tells the story of the Battle of Mogadishu that took place October 3, 1993. The author describes the action that took place that day in chilling detail that is written with the unique voice of a journalist that draws the reader into the action. Black Hawk Down is a well written narrative of modern combat that will keep the reader stuck to the page until the last word.

On October 3, 1993 Task Force Ranger prepared for a mission in the heart of Mogadishu. It was supposed to be a quick mission, lasting less than an hour. The soldiers, Rangers, Delta operators, and SEALs, were to go to a target house where clan leaders were meeting to capture two of warlord Aidid's important gang members. Due to the fact that it was a daytime mission, the soldiers assigned to the mission replaced things like canteens and NODs—Night Operation Devices—with extra ammunition.

The mission went wrong almost from the first moments for Chalk Four, which was led by Special Sergeant Matt Eversmann. Eversmann was told that his team would have to descend to the streets of Mogadishu several blocks from the corner they were assigned to set up a blocking position around. Then one of his Rangers, a young man straight out of high school who had yet to go through Ranger school, fell from the helicopter as the rest of the team slid down on ropes.

As Eversmann and his men struggled to get through the congestion of the streets of Mogadishu under fire by both the local militia and local citizens angered by the collateral damage of this and previous missions, the Delta operators raided the target house and took prisoner multiple Somalis, including the two target men and a lieutenant of Aidid's. This was even better than they had planned.

The Humvees whose job it was to pick up the prisoners and transport them back to base become lost in the melee that quickly erupted in the streets. Struck with the loss of one of their own while attempting to return to base with Evermann's injured man, the men were somewhat reluctant to return to the fight. However, with the loss of one Black Hawk, the men knew they must return and recover their men. Others on the base who were not part of the original assault, lined up to join the fight, including one who was kept out of the fight due to an injured elbow.

A rescue team was sent to the crash site to help the injured, but assault by Somalis caused the helicopter to take off again right away, leaving two of the rescue specialists on the ground with little support. The Humvees finally picked up the prisoners and were directed to the crash site, but they lost their direction due to miscommunication with air support and decided to abandon the cause in favor of returning the injured to base. During all of this, another Black Hawk helicopter was shot down and the crew, as well as two Delta snipers who were roped in to help, were killed, with the exception of the pilot. Warrant Officer Durant was rescued by a militia leader who hoped to trade him for clan members previously captured by Americans. Durant was then taken by leaders who wanted to hold him for ransom against the American government.

The ground troops left in Mogadishu made their way to the first crash site soon after the prisoners were secured. This included both Delta operators and Rangers. The Delta operators ignored orders by the leader of the Rangers, Captain Steele, and moved ahead. Some of the Rangers followed them. Delta Operator, Sergeant First Class Howe, saw the need for cover and cleared a house for that purpose, but others cleared another house, causing a separation in the remaining troops that would make rescue difficult.

Multiple soldiers were wounded during the night and a makeshift clinic was set up to treat them. Rescue was dispatched near midnight, consisting of vehicles and soldiers from America, Malaysia, and Pakistan, but it would take hours to reach the stranded soldiers due to road blocks and fighters in the streets. When the rescue convoy finally reached the first crash site, it took hours to excavate Wolcott's body from his downed aircraft, delaying the rescue mission. Finally the vehicles, loaded with the wounded, took off, but dozens of soldiers were left without a seat in the vehicles and forced to run alongside them to the Pakastani Stadium where safe harbor was offered.

More summaries and resources for teaching or studying Black Hawk Down: A Story of Modern War.

Black Hawk Down: A Story of Modern War from BookRags. (c)2021 BookRags, Inc. All rights reserved.