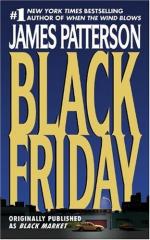 James Patterson
This Study Guide consists of approximately 46 pages of chapter summaries, quotes, character analysis, themes, and more - everything you need to sharpen your knowledge of Black Friday.

On the morning of December 4, officials receive a recorded threat. The voice indicates that a firebomb will devastate the Wall Street Financial District. As a demonstration of what the terrorists can do, they detonate a bomb on the NY pier. They promise that the bombs in the financial district would go off at 5:05 p.m. Throughout the day, officials wait for another call - demands to be met or the bombs will go off. However, the day passes and at the time appointed for the bombing, those officials realize there's not going to be another call. The time passes, and some almost seem to believe it was a hoax, but the actual explosion happens at 6:30 p.m. on December 4. The problem for law enforcement is that they have no idea who the terrorist organization, known as "Green Band", is, and the group has made no demands.

Arch Carroll is an officer with a New York City anti-terrorism group. He is working undercover as "Crusader Rabbit," a bag man, when he's called away to work on the Green Band case. Carroll is a widower with two children who are cared for by his sister, Mary Katherine, and admits that he drinks too much and takes too many risks since the death of his wife, Nora, three years ago. During the investigation, he meets Caitlin Dillon, a financial expert and official of the SEC. Caitlin and Carroll hit it off personally in addition to working together to solve the Green Band case.

Green Band is actually a group of twenty-eight veterans. Several of them work for a company called Vets Cabs and Messengers that provides delivery and transportation services for veterans and their families. That fact is what puts officials on the way to tracking down those in Green Band.

While officials are busy tracking down Green Band, they are met with obstacles and diversions that seem difficult to explain until they discover that an elusive terrorist is actually FBI Director Walter Trentkamp, long-time friend of Carroll's father. When Carroll discovers the deception, he's angry and feels bitterly betrayed.

The bombing of the buildings on Wall Street provide an incredible opportunity for theft, which is what actually occurs. As Caitlin explains, the computer systems are antiquated and leave the financial experts floundering to discover what's missing. Projections are little more than guesses though Caitlin's mentor, Anton Birnbaum, comes up with a plan to have two men do major purchasing in an attempt to rally stock prices. That plan doesn't immediately work but the stock market does rally within hours. It won't be until much later that the officials discover that Green Band is only the military force doing the hands on work of the Wall Street bombing. There are additional strings being manipulated by a group known as the Committee of Twelve. This "committee" is comprised of the current vice-president of the United States, military leaders and others. Another of their goals is to force the U.S. President to step down, putting one of their members in power.

Green Band is commanded by Colonel David Hudson, a military veteran with extensive training who lost his arm in Vietnam. Hudson feels that veterans have been cheated by the Federal Government and his own motives in participating are honorable - to restore some of the money he feels is owed to veterans. It almost seems that Hudson doesn't know the extent of the manipulation of the Committee of Twelve, but that idea is dispelled by the final chapter of the book. Hudson telephones the President's direct line and informs them that the White House is to be firebombed. While everyone is expected that disaster - and aware that Hudson is the man who could make it happen - the homes of the twelve are bombed.