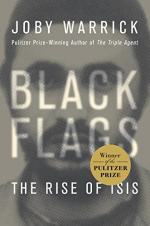 Joby Warrick
This Study Guide consists of approximately 60 pages of chapter summaries, quotes, character analysis, themes, and more - everything you need to sharpen your knowledge of Black Flags.

This detailed literature summary also contains Topics for Discussion on Black Flags: The Rise of ISIS by Joby Warrick.

The “black flags” of this book’s title refer to the banners carried by the Islamic State of Iraq and Syria – the group of extremists sometimes called Daesh, sometimes the Islamic State of Iraq and the Levant, but most frequently referred to as ISIS. These flags, and the territory they currently fly over in Iraq and Syria, are considered a fulfillment of an old Hadith prophecy about “mighty men” who would one day establish an Islamic caliphate and set up a final confrontation with the non-believers. Since their confrontation, with not only “infidels” non-Muslims but their more modern, tolerant Muslim neighbors is ongoing, Black Flags: The Rise of ISIS focuses primarily on the ideology, and the mistakes, that have contributed to the ISIS presence today.

As such, aside from their appearance in the prologue, the names “ISIS” and “Islamic State” do not actually appear until two-thirds of the way into the book. The beginning and central passages of Black Flags focus primarily on the life and ideas of Abu Musab al-Zarqawi, a Jordanian terrorist whose presence in Iraq and ties to al-Qaeda were used as justification for the 2003 Iraq invasion. Zarqawi was, in fact, never aligned with the Iraqi dictator Saddam Hussein, but upon Saddam’s fall disgruntled Sunni Muslims flocked to him, as he carried out appalling attacks on not only foreign troops, but Shiite Muslims and even Sunnis who did not share his beliefs.

His attacks stirred sectarian conflict between Shia and Sunni in the years that followed, turning Iraq into a quagmire that claimed more than 4,000 American lives and perhaps 20 times as many Iraqis. He also proved the master of chillingly effective propaganda, videotaping himself decapitating an American civilian and making himself a folk hero to Muslims around the world, outraged by the invasion and the torture of Iraqi detainees. Outside of his native Jordan for much of his adult life, he nonetheless schemed to punish his country of birth for its liberalism and peace with Israel, ordering the successful assassination of their U.S. ambassador and a grisly hotel bombing that is still Jordan’s worst incident of terror, plus other attacks that were thwarted.

Zarqawi’s savagery eventually turned collaborators against him, restricting his operations until the day the U.S. military tracked him to his compound and killed him with an airstrike. Years later, though, those who had served under him would return, rebranded as the Islamic State and determined to take advantage of chaos in the Syrian civil war, as well as continued Shia-Sunni feuding in Iraq. Taking advantage of the Syrian government’s mishandling of protestors – much as Zarqawi took advantage of U.S. mistakes in Iraq – the tattered remnants of Zarqawi’s terrorist cell rebuilt themselves as an army, taking Zarqawi’s media self-promotion prowess to new heights while maintaining his barbarism.

The book concludes in the present day, with ISIS firmly entrenched in its Iraqi and Syrian territories, sending stark warnings to its rivals through videotaped executions. Its actions, however, have united much of the Muslim world against it, with clerics who once inspired its actions now condemning it, and with its neighbors committed to rolling back its gains.

More summaries and resources for teaching or studying Black Flags: The Rise of ISIS.