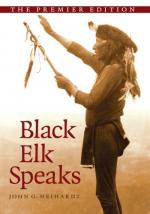 John Neihardt
This Study Guide consists of approximately 30 pages of chapter summaries, quotes, character analysis, themes, and more - everything you need to sharpen your knowledge of Black Elk Speaks.

In the following excerpt, Couser argues that, despite its reknown, Black Elk Speaks is not a reliable picture of Lakota culture, but rather suffers as a result of the undue influence of the autobiography's white co-author.

Christopher Sergel adapted Black Elk Speaks as a stage play in 1996. It is available from Dramatic Publishing.

An abridged audio recording of Black Elk Speaks was released by Audio Literature in 1998. It is available on cassette tape and narrated by Fred Contreras.

Alone among similar books, Black Elk Speaks, Being the Life Story of a Holy Man of the Oglala Sioux, as told through John G. Neihardt (1932), has enjoyed both popular and critical acclaim. Since the 1960s, it has been something of a cult classic, and until quite recently, scholars and critics extolled it as an authentic and authoritative Native American autobiography—indeed, perhaps the only one. Euramerican critics set it...