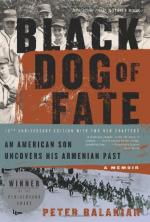 Peter Balakian
This Study Guide consists of approximately 36 pages of chapter summaries, quotes, character analysis, themes, and more - everything you need to sharpen your knowledge of Black Dog of Fate.

This detailed literature summary also contains Topics for Discussion and a Free Quiz on Black Dog of Fate: A Memoir by Peter Balakian.

Black Dog of Fate is the story of Peter Balakian on his journey through life to discover his roots and the fate of his people, the Armenians. Through secret stories, documents, poetry, and lost artifacts, Peter is able to piece together his family history through the Armenian genocide and discovers that the past has much influence over the present and future.

Peter Balakian is a young man growing up in suburban New Jersey with his parents, grandmother, and aunts when he first hears phrases and fables from his family's origins. Peter realizes early that his family is different from others in that they carry with them Armenian customs, although they also fully embrace much of life in suburbia. His grandmother, Nafina, has a vast influence on him as a child, but she speaks little of her own past. Large family gatherings are common, with Armenian foods and styles abound. When Peter reaches college, however, he begins to realize a past that his family has kept secret for many years as he learns of the Armenian genocide. Against his family's wishes, Peter begins researching the topic, only to discover that his own family was deeply involved. Through help from his aunts, he learns that his grandmother was a survivor of the genocide, but that her entire family was killed, including her first husband. He learns of the horrific torture, slaughter, starvation, disease, and misery bestowed on the Armenian population by the Ottoman empire in 1915. He pieces together the life of his grandmother in the old world as she and her two young daughters battled for survival. He also learns of his father's family and of their own sacrifices at the time of the war. He even discovers that his grandmother, in 1920, began a claim against the Turkish government for her loss, which included her parents, all brothers and sisters, nieces, nephews, and her husband, as well as all of their belongings. Amid Balakian's own research, there are many testimonies of witnesses in 1915 of the horrific crimes against humanity at the hands of the Turks and many stories, both of survival and of loss. Through this, Peter discovers he is better able to understand his aunt, his parents, and his beloved grandmother, as well as better able to understand himself.

Black Dog of Fate is not a light story. It is not a story of hope, necessarily, or a story of accepting one's ethnic heritage. Instead, this book is an angry look at the near eradication of an entire population at the hands of an empire. It is the story of one young man's struggle to understand victimization, and of the power the past holds over people. It is a story of anguish, fear, loss, grief, and survival. However, within this dark setting, there are moments of deep understanding and glimpses of the hope that one day, the people of Armenia will be recognized and that the genocide will be accepted. As Balakian points out, this recognition is the only thing that can allow Armenians, including his own family, to heal.

More summaries and resources for teaching or studying Black Dog of Fate: A Memoir.