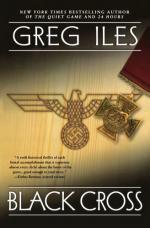 Greg Iles
This Study Guide consists of approximately 47 pages of chapter summaries, quotes, character analysis, themes, and more - everything you need to sharpen your knowledge of Black Cross.

This detailed literature summary also contains Topics for Discussion and a Free Quiz on Black Cross by Greg Iles.

The Black Cross is the tale of Mark McConnell, a doctor, chemical engineer, and a pacifist, who is thrown into action during World War II. Persuaded by Brigadier Duff Smith and motivated by his brother's death, Mark embarks on a mission to enter Germany and steal a sample of toxic gas as well as destroy the remainder of the production of the gas which will kill the innocent prisoners held within the camp. Mark is paired on this mission with Jonas Stern, a Jewish refugee from Palestine. Jonas Stern takes to the mission more than Mark does, but as the two train for their mission they realize that they have been manipulated and lied to about this mission. The manipulations cause these two men to bond in their mission and in protecting each other.

While Mark and Jonas are training, Jonas's father, Avram, is being held at the German prisoner camp of Totenhausen and assisting the new prisoners who have arrived. Unknown to Jonas, he prepares to destroy the camp and his father. Avram has formed a relationship with a young Jewish woman named Rachel and has taken measures to protect her, along with several of the other prisoners. Along with the prisoners, an SS officer, Schorner, is also taken with Rachel and has taken her as a lover.

Also, there is a traitor in the Totenhausen Camp who is leaking information to the Allied forces and Brigadier Smith. This information is what has put Smith's plan into action and informed him that he needed to send Mark and Jonas into action. The source of this information is coming from a woman named Anna and a man named Ariel. Both have been assisting the Doktor Brandt with his experiments within the camp on the prisoners and children, and both are willing to die to keep the Nazi gases Sarin and Soman from being released on the Allied forces that are preparing to invade.

As all these characters work toward destroying the camp, the manipulations of Brigadier Smith and the cruelty of Herr Brandt are revealed as well as the plan of action changed. Once Jonas has discovered that his father is alive and is one of the prisoners which he was sent to destroy, he must convince the man he was sent with to save as many of the prisoners as possible. The men plan a new course of action without the knowledge of the Brigadier Smith and the Allied forces. They set out the plans and place them into action. As they do, the actions of the Avram and Rachel assist them with their new plan and some of the prisoners are saved. The camp is destroyed and the Nazis there killed. Mark and Jonas rescue Anna and Rachel's child.

Once back from the camp, Mark is reunited with his brother he thought was dead. He eventually returns to the United States and his wife, Sarah, and becomes a lung specialist. Mark and his wife are killed in a helicopter accident. His grandson is told of his adventures during World War II by a family friend. From this tale, Mark's grandson goes to visit Anna and tells her of his grandfather's death.

More summaries and resources for teaching or studying Black Cross.