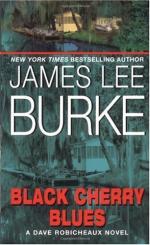 James Lee Burke
This Study Guide consists of approximately 42 pages of chapter summaries, quotes, character analysis, themes, and more - everything you need to sharpen your knowledge of Black Cherry Blues.

Black Cherry Blues is a novel by James Lee Burke featuring his popular character Dave Robicheaux. Dave is still reeling from the murder of his wife when an old friend enlists his help in a suspected murder case. Dave refuses his help several times, but old grievances cause him to reach out to the police in a half-hearted attempt at help. This attempt, however, proves to be dangerous for Dave's daughter when a threat is made against her life. Dave takes matters into his own hands, warning the two men off, only to leave himself vulnerable to a murder charge. Now Dave must fight for his freedom in a case he is not even sure he is completely innocent of. Black Cherry Blues is a novel of grief, of fear, and of hope that will entertain Burke newcomers and fans alike.

Dave has settled down to a normal life, working his business and caring for his daughter, in the aftermath of his wife's murder. The last thing Dave wants is to become involved in someone else's drama, so when Dixie Lee Pugh reenters his life after a more than twenty year absence and asks for help, Dave refuses. However, when Dixie Lee is nearly killed and then set up on a drug charge, Dave feels the least he can do is go to the police with information Dixie Lee supplied him about a murder in Montana. While Dave is making his statement, the two men Dixie Lee accused of murder are in the next room.

Dave walks out of the police station only to be accosted by Vidrine and Mapes, the men Dixie Lee overheard discussing a murder. The two men warn Dave to stay out of their business. Dave cannot leave things alone, however. The oil company Vidrine, Mapes, and Dixie Lee work for is the same company responsible for the death of Dave's father. With this as motivation, Dave decides to go to the oil company and ask a few questions. Dave's questions are not received well. A few days later, Dave receives a package in the mail that makes threats against his daughter, Alafair.

Dave goes to the police with the package, but because there are no fingerprints on any of the items, there is nothing the police can do. Dave decides to take matter in his own hands. Dave goes to the hotel where Vidrine and Mapes are staying, breaking into their room and beating them with a chain in order to frighten them away. Instead Mapes takes a pocket knife Dave accidentally left behind and kills Vidrine. The following day Dave is arrested for murder. Dave remains in jail for several weeks while he attempts to raise the money to cover his bond, refusing help from Dixie Lee and his mob friend.

When Dave is released from jail, he cannot sit still and wait for his trial to begin. Dave decides to travel to Montana to find evidence of the murder Dixie Lee overheard being discussed. Once in Montana, Dave goes to Dixie Lee for help, but finds him uncooperative because of the mobster with whom he is living. However, an ex-partner of Dave's who is also working for the mobster offers his help. Dave investigates the disappearance of two Indian activists who appear to be the victims of Vidrine and Mapes, but cannot get anyone to believe their disappearance is murder. It seems everyone, including the local police, believe the two men left town to avoid mounting debt.

As Dave continues to look into the disappearance of the two Indians, he learns that his ex-partner's new girlfriend is the sister of one of the men. Darlene has been living with Cletus in order to find out her brother's fate. However, Darlene is killed before she can learn anything. At the same time, Mapes begins watching Alafair at her school. Dave goes after him, making threats against him. While doing this, Dave sees a unique gun that Mapes has. Later, Dave finds the bodies of the two men Mapes killed and is able to connect their murders to Mapes's unique gun. As a result, Mapes is arrested for murder and charges are dropped against Dave.