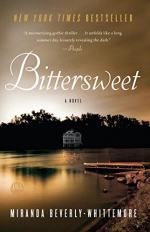 Miranda Beverly-Whittemore
This Study Guide consists of approximately 49 pages of chapter summaries, quotes, character analysis, themes, and more - everything you need to sharpen your knowledge of Bittersweet.

All summer, May carries around her copy of Paradise Lost, the epic poem written by John Milton in 1667. It is the Biblical story of man's fall from grace, including Adam and Eve's expulsion from the Garden of Eden. The book is symbolic because of Mabel's perception of Winloch being paradise on earth. However, as Mabel discovers more of the Winslows' secrets, she realizes that Winloch is not a paradise at all. It is merely a beautiful place to visit.

When Mabel first arrives at Winloch, she is baffled by the installation of door locks and bolts on the inside of the cottage door as well as the bedroom and bathroom doors. She later learns that Tilde had them installed to protect Ev and Mabel from Birch's sexual advances.

Indo has enlisted Mabel's help in trying to locate a manila folder which...