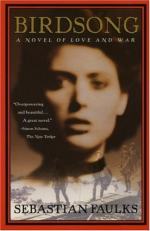 This detailed literature summary also contains Topics for Discussion and a Free Quiz on Birdsong by Sebastian Faulks.

Birdsong by Sebastian Faulks is a novel about World War I and its effects on the novel's protagonist, Stephen Wraysford, as well as his granddaughter, Elizabeth Benson. Before the war, Stephen has an affair with a married woman which produces a child of which he is unaware. Stephen fights the Germans during the war and is deeply affected by the violence he witnesses. Sixty years later, Elizabeth becomes interested in learning about her grandparents and studies the war to gain a better understanding of her grandfather, Stephen. Birdsong is an interesting and entertaining novel about how war affects those who serve in battle and how the history of war is important for those in the future seeking to understand the past.

In France 1910, Stephen is sent to the Azaires in Amiens to learn about the textile factory, but his attraction to Isabelle, Mr. Azaire's wife, leads to them having an affair. Isabelle runs away with Stephen, and they live happily in a small house in St.-Remy-de-Provence. When Isabelle realizes she is pregnant, she fears for her child's future and leaves Stephen to return to her family's home, but she never tells Stephen about the child she carries.

In France 1916, Stephen is a lieutenant in France during World War I. He feels disdain for his men and even for his best friend, Captain Michael Weir. Stephen refuses all offers of leave, even after he is wounded and nearly dies. A miner in the tunnels on the Front, Jack Firebrace, learns his son has died from a fever and mourns for his dead son. When the platoon is ordered to attack at Hawthorne Ridge, many of them write to their nearest relatives since the attack seems doomed to fail, and Stephen writes to Isabelle because he has no one else to write. Most of Stephen's platoon is killed during the attack.

In England 1978, Elizabeth, Stephen's granddaughter, becomes interested in learning about her grandfather's life and the war. In Albert, she is struck by the magnitude of the war memorial. When she finds Stephen's journals in her mother's attic, she tries to decipher them since they are written in code.

In France 1917, Stephen runs into Jeanne while on leave in Amiens, and she agrees to take him to see Isabelle whose face was disfigured by a shell during a bombardment. Although Isabelle tells him about her relationship with Max, a German soldier, she does not mention their child for fear it would complicate matters between them. Stephen is relieved to return to the Front, and he begins corresponding with Jeanne. Shortly after Stephen is assigned to a staff job, he learns that Weir has been killed by a German sniper, and he mourns for his friend.

In England 1978-79, Elizabeth continues researching the war, and she talks to veterans about their experiences in her attempt to learn more about her grandfather. She learns that she is pregnant with Robert, her married boyfriend's child.

In France 1918, Stephen and Jack Firebrace are trapped in a tunnel when the enemy sets off an explosion. Jack tells Stephen about his dead son, John, and Stephen promises to name his son John, if he ever has one. Although Jack dies in the tunnel, German Lieutenant Levi rescues Stephen who returns to the English Front.

In England 1979, Elizabeth feels that she knows much more about the war and her grandfather after reading all of his notebooks. When she finally tells her mother about her pregnancy, Francoise is oddly supportive and explains that she was raised by Stephen and Jeanne after Isabelle's death. Elizabeth gives birth to her son whom she names John in honor of her grandfather's promise to Jack Firebrace.