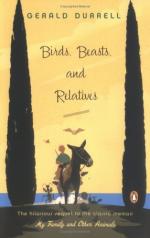 Gerald Durrell
This Study Guide consists of approximately 29 pages of chapter summaries, quotes, character analysis, themes, and more - everything you need to sharpen your knowledge of Birds, Beasts, and Relatives.

This detailed literature summary also contains Topics for Discussion and a Free Quiz on Birds, Beasts, and Relatives by Gerald Durrell.

The story opens with a prelude called "Conversations" that occurs during a reunion of Gerald Darrell, his siblings and his mother in which he announces his intention to write a sequel to his first book, "My Family and Other Animals." His mother initially tells Gerald's brothers that she can't stop the project, but when he proposes to include a particular story about his mother, she joins in the objections. Gerald notes that, considering the number and intensity of the arguments against the project, there's only one thing to do: Sit down to write.

The book is a coming of age story about a ten-year-old boy who spends an idyllic year on the island of Cofru with his widowed mother, his older sister Margo, and his older brothers, Leslie and Larry. All have their quirks and each tolerates Gerald's love of natural science in a different way - some with objections that are overridden by Gerald's mother. Over the course of time, he finds a great number of things to be interested in, including the array of aquatic life that is brought up from the depths of the nearby bay in the nets of fishermen. Those that can be carted home are. Others are kept in a rock pool built by Gerald so that he can further study the ocean creatures that won't survive in his makeshift aquariums.

Through his search for the best animals and insects, and in his quest for information, he meets an array of people. Among those is Dr. Theodore Stephanides. Gerald is fascinated with the wealth of information Theo has available but despairs of the opportunity to spend more time together after an initial meeting arranged by Gerald's tutor, George. He needn't have worried because Theo not only spends time with the family, he occasionally spends the most of a day with Gerald in the pursuit of some particular specimen of animal, insect or aquatic life.

Gerald's menagerie includes a faithful dog named Roger and two who are less so named Puke and Widdle. There's a donkey, a birthday gift from Gerald's mother, named Sally. The spade-footed toad given to him by the olive press overseer becomes known as Augustus Tickletummy, named for his love of having his tummy rubbed. There are owls, hedgehogs (including four that die of overeating at the hands of Gerald's sister Margo), and seahorses. When Gerald encounters a gypsy with a dancing bear, he makes friends with the bear and wants desperately to have the animal for his own. The gypsy refuses to sell the bear and Gerald has trouble explaining to his family how it is that the bear happened to follow him home. He points out that, for once, he isn't to blame but it's difficult to make his family believe in his innocence.

As the wine season draws to a close, Gerald thinks ahead to the coming spring, but spring in Corfu is a dream that is cut short by a declaration of war that sends the family back to England.

More summaries and resources for teaching or studying Birds, Beasts, and Relatives.