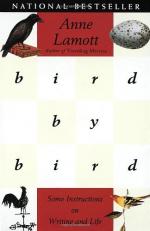 Anne Lamott
This Study Guide consists of approximately 32 pages of chapter summaries, quotes, character analysis, themes, and more - everything you need to sharpen your knowledge of Bird by Bird.

The second piece of wisdom, following small assignments, is the concept of poor first drafts. Anne maintains that poor first drafts will almost inevitably precede better second and third drafts. She likens it to a child letting all their thoughts, emotions and ideas pour out onto the page.

As a food writer for a now defunct magazine (its folding was not her fault, she neurotically assures the reader), Anne details her struggles with awful first drafts. After visiting restaurants with friends, Anne uses observations from those times as a basis for her first drafts. She reveals the importance of quieting the critical voices that arise as the words begin to form on the page.

The initial lessons are told using humor and personal memories as she herself employs those techniques. Anne depicts her...

More summaries and resources for teaching or studying Bird by Bird.