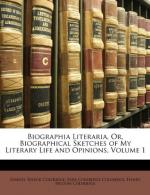 Coleridge says he owes two-thirds of his reputation to critics. The public remembers the remarks of the critics and Coleridge feels that he has been subject to much abuse which he does not deserve. He claims he has not engaged on any controversies of disputes beyond that of the normal social interchange of opinions. He does not understand why anyone would envy him or be vindictive toward him

Coleridge feels that the only chance he has had to anger anyone is when his essays of national interest were published in newspapers. Those who do not agree with his views might be angered by his opinions. His lectures were on the criticism of Shakespeare and Milton.

All men who can read sit as critics of a writer's work. Many reviewers will copy and print a work that they review, especially...