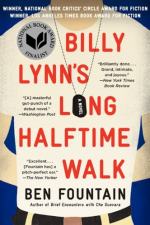 Plot Summary
+Chapters Summary and Analysis
Chapters 1-2, The Thing Begins, A Private in the Infantry
Chapters 3-4, It Is Mostly In Your Head But We Have Cures For That, The Human Response
Chapters 5-6, By Virtue of Which the Many Become One, Bully of the Heart
Chapters 7-8, We Are All Americans Here, Dry Humping for the Lord
Chapters 9-10, Jamie Lee Curtis Made a Shitty Movie, XXL
Chapters 11-12, This Is Everything There Is, Billy and Mango are Out for a Walk
Chapters 13-14, Raped by Angels, If In The Future You Tell Me This Is Love, I Will Not Disappoint You
Chapters 15-16, Temporary Sanity, Will Slay Vampires for Food
Chapters 17-18, Money Makes Us Real, The Proud Good-Bye
Characters
Objects/Places
Themes
Style
Quotes
Topics for Discussion
Order our Billy Lynn's Long Halftime Walk: A Novel Study Guide

Ben Fountain
This Study Guide consists of approximately 37 pages of chapter summaries, quotes, character analysis, themes, and more - everything you need to sharpen your knowledge of Billy Lynn's Long Halftime Walk: A Novel.

"Billy Lynn's Long Halftime Walk," written by author, Ben Fountain, is a novel that takes the reader through one day in the life of was hero Billy Lynn and his seven fellow Bravo squad members. The day depicted is the last day of the squad's Victory Tour and they are being honored through their participation in various activities during a Dallas Cowboys football game, including a half-time show. Throughout the book, Billy shares his thoughts, feelings, and experiences about being in war, being honored, wanting a relationship, and being redeployed.

The first two chapters of the book introduce the main characters and plots. In these chapters, the men of the Bravo squad are getting ready to go to Texas Stadium where they will all be honored for their brave actions during the Iraq war. The reader also learns that a movie producer is trying to turn their story into a movie, though he doesn't ultimately succeed. Although approximately ten characters are introduced during these chapters, Billy clearly stands out as the main character.

As the book progresses, the major and minor characters are developed further, with the focus continuing to be on Billy. Throughout the next several chapters, the reader gets a more intimate perspective on Billy's thoughts about being redeployed and wanting a meaningful relationship, as well as his struggle to understand the undying fanaticism of the American people, through his interactions with his squad members and with fans. It also becomes clear that Billy is struggling to process many of the experiences that he has had during the war, including the death of a fellow squad member and the randomness and fear that accompany a war, as his mind takes him through these memories repeatedly throughout the book. Chapter 6 develops Billy's character in a different way when his family members are introduced, as the reader is able to see how their dysfunctional dynamics have contributed to shaping Billy's overall personality.

Chapter 7 introduces another plot line when Billy makes an instant connection with a Dallas Cowboys cheerleader named Faison. Despite his stimulating conversations about business with major Cowboys executives, and his continued struggle to block out memories of the war, his connection with Faison seems to change Billy's perspective and priorities in life.

Chapters 13 and 14 bring the climax of the book as Billy and his fellow squad members participate in the half-time show. Unfortunately, it is not the experience they hoped for, as the chaos and the random loud noises bring back negative memories of the war for many squad members. Although shaken, Billy recovers well in Chapter 14 when he realizes that Faison wants a relationship with him as well.

Knowing that Faison wants the same thing that he wants prompts Billy to seriously consider the option of the leaving the Army. However, he realizes that even if he was happy with Faison, he would miss his Bravo brothers and feel guilty for not being in the war with them. At the end of the book, Billy realizes that he has no choice but to go back to Iraq. As the Bravo squad leaves for redeployment, Billy can't help but think that he'll never see Faison again, although he hopes that he is wrong.