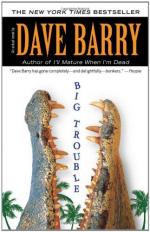 Dave Barry
This Study Guide consists of approximately 30 pages of chapter summaries, quotes, character analysis, themes, and more - everything you need to sharpen your knowledge of Big Trouble.

Big Trouble by Dave Barry is a satirical misadventure set at the end of the twentieth century in Miami, Florida. The story opens with a vagrant who recently arrived in the city named Puggy. Puggy has experienced nothing but luck since his arrival in the city, having been hired on as a helper at a local bar called the Jolly Jackal for managing to help the owners throw out two petty criminals, Snake Dupree and Eddie Leadbetter. At nights, Puggy sleeps in the tree on the property of an Arthur Herk, who lives with his wife Anna and stepdaughter Jenny. Arthur is very unkind to Anna, but she stays with him for fear of what he will do to her and her daughter if she tries to leave. Arthur is also a middleman for weapons sales between the same bar that Puggy works at and his company, Penultimate.

Eliot Arnold is a former news reporter, now struggling in the advertising business. He is divorced, but stays in Miami so that he can stay close to his son, Matt, who has a crush on Jenny Herk. He is given the task of "killing" Jenny, which means squirting her with a squirtgun, and decides to break into her house one night in order to do it. Unfortunately for Matt, Arthur Herk has been embezzling from his company lately, and they send two hitmen, Leonard Ferroni and Henry Desalvo, to kill Arthur Herk at the exact time Matt shows up with his friend Andrew to play his prank. Matt rushes in and causes the hitmen to miss Arthur. Police Officer Monica Ramirez shows up to investigate.

The next day, Matt again tries to "kill" Jenny, but is interrupted by Jack Pendrick, who mistakes the prank for an actual crime. Matt, Jenny and Andrew escape. Andrew is picked up by Monica, who tells her that Matt and Jenny have probably gone back to the Herk residence. Meanwhile, Snake and Eddie decide to rob the Jolly Jackal at the exact same time Arthur Herk has arrived to purchase a bomb he intends to use to get rid of his problem with Penultimate. Snake takes him and Puggy back to the house. When Monica and the others arrive, he takes them hostage then travels with Eddie, Jenny, and Puggy to the airport, which is in complete chaos because of a snake that has gotten loose in the terminal. No law enforcement is available to help the characters stop Snake as he books a flight for himself, Eddie, and his captives, headed towards the Bahamas.

Snake manages to board the plane with a gun and the bomb, which is a nuclear device, but Monica, Eliot, Matt, and Anna have followed him. Matt and Monica make it on the plane just before takeoff and unsuccessfully try to stop Snake, who is ultimately thwarted by his companion Eddie, who doesn't like what Snake is doing. Eddie throws the bomb off of the plane and Snake falls with it to try to save it. The bomb detonates a few seconds later, harming no one.

More summaries and resources for teaching or studying Big Trouble.