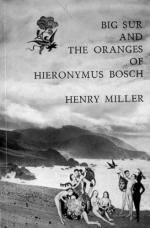 Henry Miller
This Study Guide consists of approximately 49 pages of chapter summaries, quotes, character analysis, themes, and more - everything you need to sharpen your knowledge of Big Sur and the Oranges of Hieronymus Bosch.

Big Sur and the Oranges of Hieronymus Bosch Summary & Study Guide includes comprehensive information and analysis to help you understand the book. This study guide contains the following sections:

This detailed literature summary also contains Topics for Discussion and a Free Quiz on Big Sur and the Oranges of Hieronymus Bosch by Henry Miller.

Big Sur and the Oranges of Hieronymus Bosch by Henry Miller examines the famous writer's struggle to live and write in the Pacific coast paradise, examining how inhabitants strive for peace in an enclave separate from postwar materialism and pandemonium, seekers come and go, and fans upset his equilibrium.

To writer Henry Miller in the mid-1950s, Big Sur, CA, is a place for seeking inner enlightenment, but acclimatizing to it is difficult for urban dwellers like him. Miller pictures a strong but dispersed population that balances letting others live in peace with true helpfulness in words and deeds. He sees in Hieronymus Bosch's most famous triptych a spirit-filled world in which all existence is equally precious. Big Sur shows him that one can perceive paradise by opening enough windows.

"Peace and Solitude: a Potpourri," offers fifteen sketches of how people react to this Paradise. These sketches introduce a diverse collection of characters, who involve Miller in a variety of situations that help elucidate his views on life and art in the tense post-World War II era. These include visitors arriving with preconceived notions, locals who see UFOs, hear phantom music, and do bizarre things, and children and the many ways in which parents and schools raise them. His own efforts as a single parent are a poignant comedy of errors.

Miller describes being overtaken by a watercolor mania and his constant economic troubles, which friends and fans always alleviate just in the nick of time. He writes at length about Jean Wharton, a misunderstood and maligned healer, and painter Ephraim Doner, a true image of the Creator. Fan mail is both a burden and a joy. Bosch's painting moves him to contemplate the necessity of "Genuine Love" and looking to "Making a New Fabric" for society. He dedicates a long section to Conrad Moricand, an annoying astrologer whom he befriends in Paris before the war is a special case and deals with as a house guest in 1947 before having to set him free.

The Epilogue reexamines some of the earlier themes, particularly fan mail and the need to concentrate on living in peace and solitude wherever one is. Miller asserts that this is fully possible and blesses the life that he has found in Big Sur.

More summaries and resources for teaching or studying Big Sur and the Oranges of Hieronymus Bosch.

Big Sur and the Oranges of Hieronymus Bosch from BookRags. (c)2022 BookRags, Inc. All rights reserved.