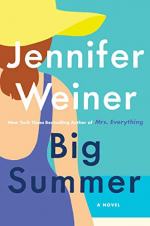 Related Topics
Good in Bed
Little Earthquakes
Mrs. Everything
That Summer: A Novel
The Summer Place

Jennifer Weiner
This Study Guide consists of approximately 62 pages of chapter summaries, quotes, character analysis, themes, and more - everything you need to sharpen your knowledge of Big Summer.

The mansion called Sea Star, where Daphne and Drue stay the weekend of the wedding, started as the four-room cottage in which Christina lived with her son, Aiden aka Nick. Drue is poisoned the night before her wedding and is found dead by Daphne in the private hot tub outside their adjoining rooms. Daphne and Darshi find Nick hiding out in an unfinished area of the huge house in the days after the murder. He claims that he and his mother lived in the house before it was enlarged and remodeled. He shows them the place on the wall where his mother once kept up with how tall he had grown.

Dive 75 is the bar where Daphne stomps on Lake’s feet in retaliation after she heard him talking about her using derogatory language. The video of Daphne’s encounter with Lake goes...

More summaries and resources for teaching or studying Big Summer.