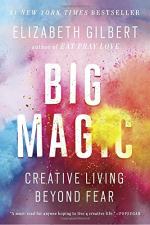 In Big Magic, Elizabeth Gilbert outlines the essential qualities of creative living. Elizabeth Gilbert believes courage is the first essential step. She admires the poet and teacher Jack Gilbert (unrelated to her), who believes that everyone has creativity inside them but needs courage to bring it out into the world. Gilbert does not believe that to live creatively one must pursue a career in the arts. She also does not believe one must make big life changes. Creative living, according to Gilbert, simply means pursuing the joy of making something with one’s self.

Gilbert acknowledges that fear may be what is holding readers back from unleashing their creativity. She recommends that readers accept their fear and allow it to exist alongside their creative expression rather than in conflict with it. Gilbert admits that total fearlessness is unrealistic, so she encourages readers to be brave in their pursuit of creativity.

In Part Two, Gilbert explains her belief in the magic nature of ideas. She believes ideas are floating through the world, always looking for the perfect partner to make them a reality. She wants readers to be open to accepting those ideas into their lives and to see inspiration as their creative partner. Gilbert does not believe an idea is the property of any one creative person and that ideas have the freedom to come and go as they please.

Gilbert shares a story from her own life which serves to reinforce her philosophy on the enchanted, magical nature of inspiration. She writes about a time when an idea she neglected moved on to another author. She and the other writer were shocked to discover the similarities in their two projects since they had never discussed them with each other. Gilbert encourages readers to embrace and accept the whims of inspiration.

In Part Three, Gilbert shares some of her family background. She uses her parents as examples of people who found ways to be creative in their everyday life without pursuing artistic careers. From her family, Gilbert learned that one does not need to ask for permission to live a creative lifestyle. She believes everyone has the potential to be creative in their own way and encourages readers to start making something.

Gilbert motivates readers to believe they are entitled to express their creativity without needing outside approval and wants them to push past self-doubt. She emphasizes that a creative person does not need an advanced degree or external validation to pursue their interests. She wants creatives to find joy from the creative process itself, not from external markers of success. Gilbert emphasizes the importance of finding this joy when the process is difficult or when one is facing rejection. She encourages readers not to take their work too seriously, and to remember that creativity is not a matter of life and death.

In Part Four, Gilbert writes about the importance of practice to improve one’s art and recommends commitment to one’s creative work. She believes one must love the work enough to stay with it even when it is not going well.

Gilbert counsels against the pressures of depending on one’s creativity for financial stability as she believes this can suffocate inspiration. She acknowledges the unpredictable and subjective nature of success in creative pursuits and believes that one should be creative because it brings them joy, not because one believes it will bring them success or validation. Gilbert also sees perfectionism as a killer of creativity and reminds readers that what matters most is getting the work done without worrying about the results.

In this section, Gilbert advocates for persistence above all else. She encourages readers to keep creating despite how many rejection letters they receive and uses examples from her own life to illustrate how creative persistence pays off.

In Part Five, Gilbert encourages readers to trust their creativity and believe it loves them in return. She cautions against becoming a martyr who feels tortured and tormented by their art. Gilbert wants readers to approach the ups and downs of creating with playfulness rather than anguish and believes that inspiration can more easily be found through joy than through pain. She also warns against being too proud with one’s work and to remain open to change.

When passionate inspiration seems lacking, Gilbert advises following one’s interests and curiosities. She believes that this will lead to untapped sources of inspiration and unexpected forms of creative expression. When faced with failure, Gilbert recommends pursuing a different art form to refresh and rejuvenate one’s inspiration.

Gilbert closes the book with a very short Part Six on the role of divinity in creativity. She uses the example of sacred Balinese dance to illustrate that the lines between high and low art are blurred. Like the Balinese, Gilbert believes that creativity is both sacred and not sacred.

In conclusion, Gilbert encourages readers to accept the paradoxes of creativity, and tells them to go forth and make something.