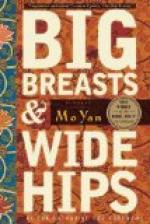 Mo Yan
This Study Guide consists of approximately 21 pages of chapter summaries, quotes, character analysis, themes, and more - everything you need to sharpen your knowledge of Big Breasts and Wide Hips: A Novel.

This detailed literature summary also contains Topics for Discussion on Big Breasts and Wide Hips: A Novel by Mo Yan.

Big Breasts and Wide Hips is a novel by Mo Yan that focuses around the life of Jintong throughout twentieth-century China, and his interactions with women.

Jintong is the ninth child of Mother, preceded by eight sisters. Mother has long been hoping for a son, and so spoils her son endlessly. All of Jintong's siblings are very unhappy with this special treatment that Jintong receives. Jintong's father and grandfather are both incompetent and ineffectual men. Indeed, Jintong's grandmother is the ruler of their family until Jintong's own mother becomes the head of the family. Except for two of her children, the rest are all conceived with different men, so Jintong has no real masculine influence in his life. He continues breastfeeding well into his teenage years, and his mother has no desire to stop him.

Jintong's family passes through World War II, the Communist Revolution in China, and the very early stages of market economics in the country in the 1980s. Jintong has an unhealthy obsession with breasts, even jealously envying the breasts of his sisters. Jintong grows older, shuffles in and out of different jobs, spends time in a labor camp, and ultimately comes home in his forties. Still then, he has an unhealthy obsession with breasts, gets into a sham marriage just as he is making a success of himself as CEO of Unicorn Bras, divorces, and loses everything. He returns home to bring his mother to church before she dies, and meets his half-brother, who is a pastor.

More summaries and resources for teaching or studying Big Breasts and Wide Hips: A Novel.

Big Breasts and Wide Hips: A Novel from Gale. ©2005-2006 Thomson Gale, a part of the Thomson Corporation. All rights reserved.