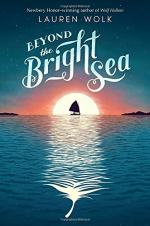 Lauren Wolk
This Study Guide consists of approximately 93 pages of chapter summaries, quotes, character analysis, themes, and more - everything you need to sharpen your knowledge of Beyond the Bright Sea.

Beyond the Bright Sea Summary & Study Guide includes comprehensive information and analysis to help you understand the book. This study guide contains the following sections:

This detailed literature summary also contains Quotes and a Free Quiz on Beyond the Bright Sea by Lauren Wolk.

Beyond the Bright Sea by Lauren Wolk is a historical fiction novel for young readers. It follows the narrator, twelve-year-old Crow, on a journey to discover her family roots as she comes to terms with her own understanding of what defines a family. Osh, the man who found the newly born Crow tied into an old skiff, raised her. Miss Maggie, a neighbor on Cuttyhunk island. Although the two adults have no outward romantic relationship, they work as a team to parent young Crow, functioning as her mother and father. Crow is happy with her life on Cuttyhunk but has many questions about her past and as she gets older, the yearning to find answers grows and grows until one day she makes a discovery. Crow has always been keenly aware that the local residents keep her at a distance. She learns they believe she comes from nearby Penikese Island, previously occupied by people sick with leprosy. Armed with this new realization, Crow sets out on a mission to discover her family roots and prove that she is not from the leper colony.

With Osh and Miss Maggie to guide her on her quest, Crow asks questions of those who previously worked on the island. Crow discovers a great deal about her birth family. She learns that shortly following her birth, her parents sent her out to sea in a skiff with the hope that she would find a better life than that of her older brother. He grew up in an orphanage on the mainland only to find life lonely and void of love. Crow’s parents created a fake grave so that everyone would think the baby died. They also buried jewels and coins which Susanna, the mother, had pulled from the sea. Then, the parents left clues behind, like a puzzle, so that one day their daughter would be able to retrieve her inheritance.

Crow is able to piece together the clues and finds a substantial treasure of jewels and coins buried in the baby's decoy grave. Yet while Crow becomes familiar with her family history, Osh struggles with his own fears of losing the one who he has raised and treated as a daughter.

As the novel unfolds, danger comes to the islands in the form of a violent and greedy treasure hunter named James Kendall. Having learned of the treasure Susanna had found years earlier, he is prepared to stop at nothing to find it and spends weeks digging for it. Arrested for keeping the lone resident of Penikese Island, a bird keeper named Mr. Sloan, captive for weeks, Kendall escapes from jail and comes knocking on Crow's door, believing that she is in possession of the treasure. As she comes dangerously close to losing Osh and Maggie at Kendall's hand, Crow realizes that a family is made of bonds that tie people together in ways far greater than just by blood.

With Kendall arrested once again, Crow finally moves forward, looking to her future with Osh and Maggie, while remaining thankful that she knows her personal history. True to her kind nature, Crow distributes her newly found wealth among orphans across the country and saves half of it in hopes of one day finding her brother and sharing the rest with him.

More summaries and resources for teaching or studying Beyond the Bright Sea .

Beyond the Bright Sea from BookRags. (c)2022 BookRags, Inc. All rights reserved.