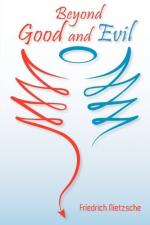 Beyond Good and Evil Summary & Study Guide includes comprehensive information and analysis to help you understand the book. This study guide contains the following sections:

This detailed literature summary also contains Topics for Discussion and a Free Quiz on Beyond Good and Evil by Friedrich Nietzsche.

Beyond Good and Evil is a philosophical examination of the theory that the "will to truth" is present in all human beings. Nietzsche believes that in order to discover the truth, one must question all one has learned and observed. This includes exploration of self perception, virtually everything taught in society, and probably the most important in the author's mind, religion. While man may have the innate ability to do this, many do not have the wherewithal or the ambition to search beneath all they have been taught. The people who do not have the ambition are viewed as weak, socialized, robotic creatures who have little worth in Nietzsche's eyes.

The philosopher asserts that his theories and reasoning are truth. Nietzsche's truth comes from many years of intense education as well as study of the great Greek masters and more modern philosophers. Nietzsche grants that the new breed of philosopher may have something new to say, but until the group proves itself, Nietzsche looks down on them as uneducated and inexperienced people who claim to know more than what is actual.

Nietzsche has very strong opinions on many things. Two of the most notable are the author's views on intelligence and the female gender. Nietzsche is extremely fond of pointing out the stupidity, naivete and folly of man in various positions throughout the ages. No matter what a person's upbringing or position in life, there is no excuse for "doltishness." In this area Nietzsche is particularly harsh and the overuse of the theme almost takes away from its impact and validity. The other topic on which Nietzsche is very vocal is women. The author believes women are frivolous, incompetent creatures who should do as they are told and keep their mouths shut. The author even refers to Napoleon's statement of how women need to be silent in church. To Nietzsche, women do not have the inclination or ability to grasp the world of philosophy or any of the sciences. The author often compares to women to artists who work not from knowledge but only from instinct.

Nietzsche is famous for the "God is Dead" quote from an earlier work. The author believes that blind religious faith equals sacrifice of self and therefore, one's own truth. One thing the author focuses on in regards to right and wrong, the faithful versus the atheist, is that there are no opposites, only shades of gray. However, later in the book, Nietzsche contradicts himself in regards to morality, which he states is at the opposite end of the staircase to immorality.

Beyond Good and Evil was translated from Nietzsche's native German by Walter Kaufman. The translation seems accurate although there may be something missing from the original tempo or flow of the words. Nietzsche cites the difference in tempo between languages as one of the reasons most works and ideas are misinterpreted.

In the end, Nietzsche sees himself as a man who has dared to delve into the truth, with no topic safe from exploration. The author believes he is a man of change and growth, forever seeking answers to unanswerable questions.

Beyond Good and Evil from BookRags. (c)2022 BookRags, Inc. All rights reserved.