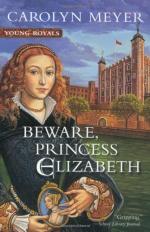 "I was thirteen, poised on the brink of womanhood, but at that moment I felt like a child myself" (Chapter 1, p. 9).

"London was noisy and dirty, unlike my quiet country home at Hatfield, where the only noise came from flocks of sheep in the nearby fields. But London was also exciting" (Chapter 3, p. 22).

"In January of 1548 London suffered another outbreak of the plague, which carried off my tutor, William Grindal" (Chapter 4, p. 32).

"Another year passed, during which Dudley succeeded in permanently removing his chief rival, Edward Seymour, by ordering his execution" (Chapter 6, p. 49).

"Poor Jane! She was a brilliant scholar, but she as completely innocent in the ways of the world" (Chapter 7, p. 56).

"The choice of a husband for the queen, then, was of the greatest importance, not merely for her own happiness but for...