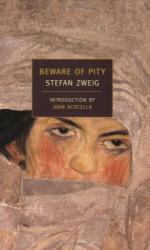 Stefan Zweig
This Study Guide consists of approximately 44 pages of chapter summaries, quotes, character analysis, themes, and more - everything you need to sharpen your knowledge of Beware of Pity.

A gaffe is a blunder done by a person, which often causes problems. In the book, the asking of Edith to dance by Hofmiller was a gaffe that began all of his later problems.

Austria is where Hofmiller is stationed in the book. Austria is a country in Central Europe, and in 1913 when the book was written, consisted of much more land than currently is allocated to the country.

In 1913, an apothecary was an individual who formulated and dispensed medicines for doctors, patients, and others, similar to today's pharmacist. However, an apothecary also gave medical advice, practiced some medicine, and often were midwives, as well.

A garrison is a collection of military troops in a single area who are there to protect it or to use it as a base. The term is also used to denote military stations.

More summaries and resources for teaching or studying Beware of Pity.