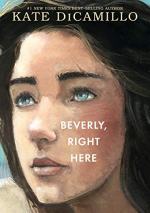 Kate DiCamillo
This Study Guide consists of approximately 25 pages of chapter summaries, quotes, character analysis, themes, and more - everything you need to sharpen your knowledge of Beverly, Right Here.

The following version of this book was used to create this study guide: DiCamillo, Kate. Beverly, Right Here. Candlewick, 2019.

The novel is told in third-person.

When Beverly's dog dies, she decides it is time to run away from home. Her cousin drives her out of town, and she begins walking toward the beach along the highway. She finds a fish restaurant and applies for a job. Beverly calls her mother, but she refuses to tell her where she is or go back home. Beverly makes her way to the Seahorse Court trailer community, and she meets a kindly older woman named Iola. Iola takes her in, and Beverly offers to drive her around town in return for staying with her.

Beverly spends time at the beach when she is not busing tables at the restaurant. She drives Beverly to bingo, but she waits for her in the car. She and Iola talk about the sadness that they feel sometimes overwhelm them. At the restaurant, Mr. Denby, the boss, tells the girls about how he sees them as daughters and wants the best for them. Freddie, a waitress, continues wanting to become an actress. Beverly meets Jerome, Freddie's, unkind boyfriend.

Beverly goes to the Zoom City supermarket and meets a boy named Elmer. Beverly and Elmer get off to a rough start but eventually begin hanging out together instead of fighting. When Beverly gets back to Seahorse Court, Iola is upset because she was waiting for Beverly to come home.

Iola invites Elmer to come to the VFW Christmas in July dance with her and Beverly. He agrees and they walk down to the beach together to spend time there. Beverly tells Elmer about her friend, Louisiana, who disappeared, and they lay down together and listen to the ocean.

Mr. C's restaurant is closed the next day while the employees go on strike for better pay. Beverly gets ready for the dance, and she buys raffle tickets to win a holiday turkey for Iola. Iola wins the prize turkey, and they plan to have all of their friends over.

Beverly and Iola plan their party at Mr. C's when Jerome breaks in to rob the restaurant. Jerome is caught, and Freddie runs away from the robbery. Beverly calls her friend Raymie and asks her to come and pick her up. Beverly and her new friends enjoy their holiday-themed dinner.