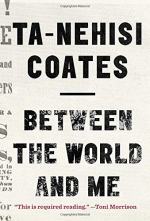 Between the World and Me Summary & Study Guide

Ta-Nehisi Coates
This Study Guide consists of approximately 41 pages of chapter summaries, quotes, character analysis, themes, and more - everything you need to sharpen your knowledge of Between the World and Me.

Between the World and Me Summary & Study Guide Description

Between the World and Me Summary & Study Guide includes comprehensive information and analysis to help you understand the book. This study guide contains the following sections:

This detailed literature summary also contains Topics for Discussion on Between the World and Me by Ta-Nehisi Coates.

Beginning with the words “Dear Son”, the author makes the work’s intention clear from the start: to introduce his son to the larger social, economic, and historical context of the fear within which black people in general, and young black men in particular, live in contemporary America. The introduction proper begins with the author’s response to the question of an interviewer about the relationship between violence and being black in America, and continues with analyses of the root causes of violence, the beliefs that America (as a culture) perpetuates about itself, and the need for black people to both ask a fundamental question about and of themselves and to find an answer.

As the author deepens and develops the various layers of his analysis, he introduces new elements. These include commentary and/or recollection of his own personal history (including relationships with his own father and mother), recollections of his own coming of age as a black man (including being influenced by the teachers of civil rights advocate Malcolm X), and references to America’s history of slavery – which, he says, made up (and continue to make up) the socio-cultural, economic, and political foundations of the treatment of black people in America. He draws parallels – or rather, potential parallels – between his own experiences, those of his son, and those of three young men (Michael Brown, Trayvon Martin, and Jordan Davis) whose deaths in recent years have brought the dangers of being young, male, and black to public light in a way other deaths have, in the past, failed to do.

At the same time as he develops his central thesis, however, the author counterpoints it with narratives of joy – specifically, his own joy at discovering more ways of being black, more experiences and more perspectives, while attending Washington D.C.’s Howard University. In addition to narrating the more personal joys associated with meeting the educated, worldly black woman who eventually became his son’s mother, the author also describes the more racially-oriented joy associated with meeting, associating with, and learning from black people not only from across America but around the world. He describes how he learned many more ways of being black, and of feeling about being black, than he learned growing up on the streets of Baltimore. There, he comments, he learned his first lessons about the relationship between violence and being black - violence that, he clearly points out, manifested between blacks as well as between black and white.

Following the chronological line of his movement out of Baltimore, to Washington, and eventually to New York City (where he arrived shortly before the events of September 11, 2001), the author develops the emotional, psychological, and cultural movement he experienced as his understanding of being black in America evolved. A particularly important point in that movement, however, occurs when the author, at the urging of his wife, travels to Paris and discovers that the culture there is, in many ways, less intrinsically and less generally threatening towards black people than the culture in America. He clearly makes the point that Europe in general, and France in particular, is not without its own racial problems, citing the experience of the Roma (Gypsies), but is nevertheless clear on the freedom he experienced on Parisian streets.

The book concludes with the author’s recollection / analysis of his conversation with the mother of one of the murdered young black men he knew personally who, in spite of how her son’s life ended, remains proud of having taught him to feel strong, free, and independent. The author uses her as an illustration of what he believes he needs to teach his son, and then uses his experience of driving through black ghettos to illustrate to the reader the need for both him and his son to learn those lessons.

More summaries and resources for teaching or studying Between the World and Me.

Between the World and Me from BookRags. (c)2022 BookRags, Inc. All rights reserved.