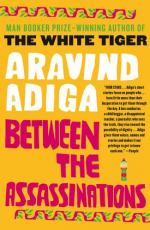 Between the Assassinations Summary & Study Guide

Adiga, Aravind
This Study Guide consists of approximately 121 pages of chapter summaries, quotes, character analysis, themes, and more - everything you need to sharpen your knowledge of Between the Assassinations.

Between the Assassinations Summary & Study Guide includes comprehensive information and analysis to help you understand the book. This study guide contains the following sections:

This detailed literature summary also contains Quotes and a Free Quiz on Between the Assassinations by Adiga, Aravind .

The following version of this book was used to create this study guide: Adiga, Aravind, Between the Assassinations. Free Press, 2010. Trade paperback edition.

Adiga's structures his collection of short stories as a day by day guide for a visitor coming to Kittur. The first short story, "Day One: The Railway Station," details the life of a Muslim boy named Ziauddin. The boy comes to Kittur to find a job. He is adamant about his heritage as a "Pathan," which causes him to work for a foreigner who is planning an attack on Indian soldiers. By the end of the story, Ziauddin is disgusted by the foreigner and goes back to working as a coolie.

"Day One (Afternoon): The Bunder" follows the life of a textile factory employee who is immersed in a world of corruption and bribes. He feels guilty about his workers losing their eyesight and the realization haunts him until the end of his story.

In "Day Two: Lighthouse Hill," a poor man nicknamed "Xerox" sells illegally copied books to students who walk down Lighthouse Hill. He is constantly being arrested but he is never deterred, even when he is beaten for selling one of India's banned books.

A young boy named Shankara in "Day Two Afternoon: St. Alfonso's Boys' High School and Junior College" sets off a bomb in order to rewrite 5,000 years of wrongs. He wrestles with his status as an outsider in both of the castes he belongs to, hating both of them for the things they do to each other.

"Day Two (Evening): Lighthouse Hill (The Foot of the Hill)" details the life of a teacher who, despite all of his efforts, has discovered that there is no innocence left in school boys and that corruption is at the heart of Kittur.

Keshava is a vibrant boy in "Day Two (Evening): Markey and Maidan" who becomes enamored with the world of the buses. He becomes a small celebrity in Kittur and subtly changes the world around him while losing himself.

"Day Three: Angel Talkies" is a riveting story of a journalist who discovers the truth that lies in the dark alleys of Kittur and seeks to rewrite it for all to see.

"Day Four: Umbrella Street" follows a man named Chenayya who knows he is slowly working himself to death. He desperately tries to crawl out of the walls of poverty, only to realize that he and the poor like him, have made that feat impossible.

Soumya, the young girl in "Day Four (Afternoon): The Cool Water Well Junction," is sent on a mission by her father to procure drugs. Her journey takes her across the treacherous streets of Kittur and illustrates the lengths a person will go to for the love of their family.

"Day Five: Valencia (To the First Crossroad)" is the tale about a old Brahmin woman obsessed with the caste structure, religion and her nephew. She is tired of working for households with spoiled children but her obsession with caste does not allow her to move within the society.

A poor man secures a steady job for a rich lady in "Day Five (Evening): The Cathedral of Our Lady of Valencia." He and his sister become permanent fixtures in her household until the day he makes a mistake that is unforgivable and irreversible.

"Day Six: The Sultan's Battery" follows the life of Ratna, a man who sells counterfeit pills to men who have venereal diseases. In a dark twist, the boy he picks for his daughter to marry is infected with the same type of disease, and even though Ratna calls the marriage off, he feels a duty to help the unfortunate boy.

"Day Six (Evening): Bajpe" is the story of a couple who still practice the traditional art of Brahmin courtesy. However, their dinner parties have a taboo subject, which causes much speculation about how their relationship works.

The last story in Adiga's collection, "Day Seven: Salt Market Village," tells the story of an older Communist man who becomes obsessed with a younger woman. The idealism of his youth and the Communist party drive him to help the woman and her mother. However, when they rebuke him, readers are able to see the man turn to the corruption and old traditions of India to help him get what he wants.

More summaries and resources for teaching or studying Between the Assassinations.

Between the Assassinations from BookRags. (c)2022 BookRags, Inc. All rights reserved.