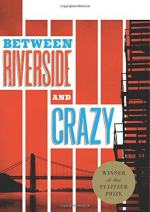 Between Riverside and Crazy Summary & Study Guide includes comprehensive information and analysis to help you understand the book. This study guide contains the following sections:

This detailed literature summary also contains Quotes and a Free Quiz on Between Riverside and Crazy by Stephen Adly Guirgis.

The play begins with a conversation between Pops and his son-by-choice, Oswaldo, who seems to be determined to move into a new phase of life: not drinking, not using drugs, and reconciling with his estranged father. He and another inhabitant of Pops’ Riverside Drive apartment, the flirtatious and sexy Lulu, both call Pops “Dad”, even though they’re not related to him: he gives them free accommodation and food, though, which for both Oswaldo and Lulu, is more good fathering than they seem to have gotten from their own fathers. Pops’ genetic son, Junior, seems less happy with Pops: as soon as Junior comes in, he and Pops rehash what seem to be old arguments about how Pops felt about his wife Delores (Junior’s mother); about a long-standing, long-stalled lawsuit against the City of New York that Pops, a former New York City cop, has been holding onto for years; and about whether Pops should give up his cherished apartment. A short while later, Pops and Lulu (who is Junior’s girlfriend) are up on the apartment building’s roof, and Lulu reveals that she is expecting Junior’s baby. The excited Pops looks forward to being a grandfather.

Some time later, Pops is visited by his former partner on the police force, Detective Audrey O’Connor, and her fiancé, Lieutenant Dave Caro. After a semi-drunken dinner, and after some reminiscing about Pops’ days on the force (reminiscing that eventually / ultimately sends Junior from the room), O’Connor and Caro tell the story of how Caro was able to purchase an engagement ring; discuss the possibility of Pops walking O’Connor down the aisle at the wedding; and, eventually, get around to attempting to get Pops to compromise on the lawsuit. Pops angrily refuses. Meanwhile, Junior and Lulu get into an argument about whether Lulu should have the baby and whether Junior really loves Lulu at all. As tension builds, Junior makes plans to leave on a mini-holiday without Lulu, but as Lulu is preparing to walk out on him, he changes his mind and they go off together. Later that night, Oswaldo returns from a meeting with his father, drunk and hurt by his father’s latest rejection. Pops, himself drunk, refuses to give Oswaldo any money. Oswaldo insists on taking Pops’ credit card. This is the end of Act One.

At the beginning of Act Two, a recently-bandaged Pops has a visit from a Church lady, who says she’s a friend and colleague of Pops’ first Church Lady, the compassionate and thoughtful Glenda. The Church Lady attempts to get Pops to take Communion with her, but he refuses. Eventually, she takes off her clothes and straddles him, their intercourse increasing his heart rate and his respiration to the point where he feels like he’s having a heart attack. He takes the Communion Host out of her moth with HIS mouth and then collapses, apparently in the middle of having an orgasm.

A short while later, Pops is receiving medical treatment at home when he’s visited by O’Connor and Caro, who bring news that the City is ready to settle the lawsuit if Pops will. Saying he deserves more money than the settlement is offering, Pops refuses. Caro and O’Connor insist. Pops then demands to be given the engagement ring that O’Connor got from Caro. Initially, both O’Connor and Caro refuse, and attempt to force Pops to back down. He refuses. As the next scene (between Pops and Junior) begins, narration reveals that Pops has settled the lawsuit, on HIS terms. Narration also reveals that Lulu is not, in fact, pregnant; that Oswaldo has again lapsed into drug and alcohol abuse; and that Pops and Junior have made up their differences … sort of. Finally, as Junior, Oswaldo, and Lulu appear to be settling into life on their own, narration also reveals that Pops has left home; that he has given the ring to the Church Lady (who has confessed that she is actually a con artist, who heard about Pops from Glenda and resolved to rob him. Pops gives her the ring anyway, hinting that there is someone, somewhere who could make good use of the money from its sale, and then leaves.