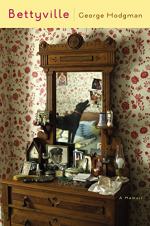 George Hodgman
This Study Guide consists of approximately 68 pages of chapter summaries, quotes, character analysis, themes, and more - everything you need to sharpen your knowledge of Bettyville.

This detailed literature summary also contains Quotes and a Free Quiz on Bettyville by George Hodgman.

George Hodgman details a living memoir of his live with his failing 90-something mother, Betty. George had left his hometown of Paris, Missouri, for New York City where he becomes notable in the world of publishing and editing. However, when George's mother can no longer care for herself, George returns to his hometown to care for her. During their time together, they share memories, talk about what the future holds and avoid the painful subject of George's parents' avoidance of his homosexuality. George settles into Paris, Missouri, again and endearingly calls his new location Bettyville, due to his mother’s all-consuming impact on his life.

George’s mother, Elizabeth Baker Hodgman, had been a lovely, vital woman in her youth and she and George come to terms with her decline every day. Betty’s irascible behavior grates on George but he understands where so much of her discontent comes from; only occasionally does he give in to his frustrations and reply to her ill-tempered retorts. George understands Betty’s fears and he attempts every day to make the time she has left more pleasant.

George does consider placing Betty in an assisted living facility but she adamantly opposes this life change. Betty does agree to a visit to a local facility but opposes every amenity shown. Ultimately, it is determined that Betty’s needs demand more care than the facility can provide so any discussions about her leaving her own home are dropped.

Being in his childhood home reminds George of growing up and how incredibly difficult it was to be a gay boy in his hometown. The memories of bullies and not ever fitting in, especially in sports, still haunt George. He still finds it hard to believe that his parents never outwardly acknowledged his homosexuality and he is not sure if this is good or bad. By not validating him in his homosexuality, George feels that his parents never really validated him.

During the memoir, George recalls good times he had with his parents and also with his favorite relative, Mammy, his grandmother. The family owned a lumber yard and George helped out during the summers when it became evident that he would not be participating in athletics.

During his return to Paris, George encounters people from his youth and they all want to know when he is going back to his glamorous life in New York. George and his New York friends wonder the same thing, but George has recently lost his job in New York and he is editing on a freelance basis to keep some money coming in while at Betty’s house.

The memoir is filled with episodes of George taking Betty to various appointments to try to maintain a sense of normalcy. They go to dinner, eat ice cream and he takes her to the beauty salon where she is always disappointed in the style results.

George makes note of some of Betty’s idiosyncrasies such as mumbling when she is afraid, repeating words and phrases, and repeatedly asking him the same questions over the course of days. George notes that he has written the book while seated at a card table in Betty’s house so she can see where he is all the time.

While George immerses himself in Betty’s life, he speculates that she could never understand the life he has led in New York. Betty has never come to terms with the fact that George has never married, has no children, and seemingly no other security in his life.

George also writes about the love he had for his father who died several years ago. They tried to share but were never close, mostly because of the unspoken cloud of George’s homosexuality which hung over their relationship. George recalls this his father had a more rebellious nature than his mother and that he loved to entertain, often breaking out into song at inopportune moments at social events.

The longer George remains with his mother, the closer they become and he is heartbroken to learn that she now has cancer in addition to the dementia. George faithfully drives the one hour each way to the hospital to visit her for days until she is able to return home.

At the close of the book, Betty is 91 years old, George remains in Paris to care for her and is unsure if he’ll ever return to the life he used to know since he has spent this dedicated time in Bettyville.

More summaries and resources for teaching or studying Bettyville.