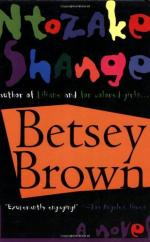 Ntozake Shange
This Study Guide consists of approximately 81 pages of chapter summaries, quotes, character analysis, themes, and more - everything you need to sharpen your knowledge of Betsey Brown.

Shange's first novel, Sassafrass, Cypress and Indigo (1985), uses prose, poetry, letters, and recipes to portray the lives of three sisters, each of them a different kind of artist, as they confront dilemmas relating to love, feminism, racial politics, and art.

Brown Girl, Brownstones (1959), by Paule Marshall, tells the story of a young Caribbean-American girl growing up in New York and learning about who she is in relation to her family, background, neighborhood, and the big city beyond.

Gloria Naylor's Linden Hills (1985) is named for the affluent black suburb where its main characters, two writers, reside. In this novel Naylor...

More summaries and resources for teaching or studying Betsey Brown.

Betsey Brown from Gale. ©2005-2006 Thomson Gale, a part of the Thomson Corporation. All rights reserved.