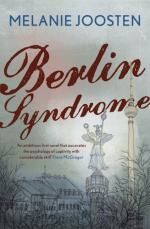 Melanie Joosten
This Study Guide consists of approximately 60 pages of chapter summaries, quotes, character analysis, themes, and more - everything you need to sharpen your knowledge of Berlin Syndrome.

Clare is from Australia and is in Berlin to take photographs for an upcoming book. Andi is a native of Berlin who grew up in East Berlin during the communist period. The two meet and feel a mutual attraction for each other. Without knowing much about Andi, Clare agrees to go to his apartment for diner. They have sex and the next morning she leaves while he is still sleeping. She decides that it is time to leave Berlin and go to her next stop, Dresden.

When Andi wakes up and finds Clare gone, he rushes to the train station and convinces her to stay in Berlin. She goes back to his apartment with him. The next day she wakes up and finds Andi gone. He has not left a key and she is trapped in the apartment. She also cannot get out on the following day, but he says he left her the key. She checks and finds one, but the next day she discovers that it is the wrong key. When she discovers that her SIM card is no longer in her phone, she realizes that Andi has no plans to let her out of his apartment.

While this goes on, readers see Andi interact with his farther and learn that Andi’s mother left him when he was five years old to go on what was supposed to be a visit to West Germany prior to the fall of the Berlin Wall. Now his mother wants to see him, but he does not want to see her.

During her time in the apartment, Clare goes through various emotions. She goes through a period in which she does not speak to Andi. At times she behaves like a robot, doing what he wants, but expressing no feelings. At other times she tries to treat him as a romantic partner. She also discovers that she is pregnant and manages to hide her pregnancy from Andi.

For his part, Andi knows that what he is doing is wrong. Yet, he continues to try to convince himself that he and Clare are meant to be together and everything will be okay once she reaches the same conclusion. In the meantime, even he is not happy with the way things are going. However, he realizes that if he lets Clare go, she may go to the police and he would go to prison. Ultimately, though, the thought of life without Clare is worse than the thought of going to prison.

One day, there is a knock at the door. Clare speaks from inside and discovers that it is Andi’s mother. Clare tells her that Andi does not want to see her, but she agrees to give Andi a note that his mother writes him. She does not tell her that Andi is holding her captive. Not long afterwards, Clare checks the door and realizes that it is unlocked. She gathers her important items and leaves, feeling a pang of guilt because she did not leave a note or say goodbye. Then she realizes that she is free and moves on.

When she exited the apartment, Clare left the door open. Andi’s mother comes and walks into the apartment. Soon afterwards, Andi arrives, calling Clare’s name. His mother turns around to face him. The narrative ends.

More summaries and resources for teaching or studying Berlin Syndrome.