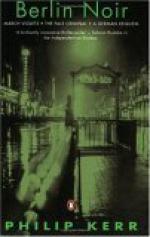 Philip Kerr
This Study Guide consists of approximately 42 pages of chapter summaries, quotes, character analysis, themes, and more - everything you need to sharpen your knowledge of Berlin Noir.

This detailed literature summary also contains Topics for Discussion and a Free Quiz on Berlin Noir by Philip Kerr.

Against the backdrop of the rise and fall of Nazi Germany, Philip Kerr has produced a trilogy focused on the life of Bernhard Gunther, former police officer turned private investigator. A man who is obviously of superior abilities, Gunther is sought by wealthy and influential individuals to solve crimes, initially involving murder but, ultimately, morphing into complex situations involving greed, corruption at all levels of government, fraud, and treachery. The reader is first introduced to Gunther as he is called upon by wealthy German industrialist Hermann Six to solve the murder of his daughter and son-in-law and the theft of an incredibly valuable necklace from their safe. The investigation takes Gunther into the inner workings of a rising Nazi Party of the 1930's and the scramble of politicians to find favor and power within the new regime. As well, the necklace is only one of two very valuable items held within the safe. Documents implicating Six in fraud and corruption have been taken as well, and their recovery proves more dangerous than solving the murder or jewelry theft.

The second tale involves an initial investigation of the blackmail of the homosexual son of a wealthy publisher. In the course of solving this crime, Gunther becomes embroiled in a case of serial murders of young German girls, is forced to re-join a police force he does not admire, and embroils himself in the increasingly antisemitic and militaristic bureaucracy of Berlin. The blackmail and the murder cases, moreover, are woven together by common threads of bribery, corruption, and greed, as the blackmailed son is found to be in conspiracy with criminals bent upon control of government officials and increasing the anti-Jewish activity in Berlin. Appalled by the direction in which his country is headed, Gunther nevertheless see the opportunity to destroy some of the evil, only to be disappointed by the outcome once the scoundrels are exposed. It appears that no one has hands clean enough to do the right thing.

A defeated Germany and a depressing ruined Berlin provide the setting for the beginning of the third book of this trilogy. The scene quickly shifts to a renewed and rebuilt Vienna, however, as Gunther is employed to find the evidence that will free a former police colleague who has been accused of the murder of an American Army Captain. His marriage in trouble, and his pockets empty, Gunther is willing to leave his unhappy existence for a new adventure. Once again, however, he is pulled into new political treachery, as American and Soviet forces compete for power in post-war Europe and are both willing to deal with former Nazi officials to achieve their ends. Gunther, on the other hand, has had a bit of an epiphany, and, even having served time in a Russian prisoner of war camp, feels a need to find some way in which to atone for the horrific evil perpetrated by the Nazi regime. His guilt stemming from not taking a stand against the Nazis has weighed upon him heavily, and when his investigation leads him on a path of exposing Nazi war criminals in hiding, he willingly accepts the challenge. Other forces are at work, however, and though he uncovers a nest of Nazis believed to have been dead, neither the Americans nor the Russians are willing to take the action he believes is necessary. In the end, he is compromised again, ever the practical man, choosing life in Vienna and a reconciliation with his wife.

More summaries and resources for teaching or studying Berlin Noir.