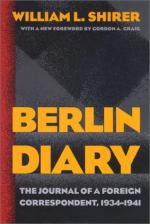 Berlin Diary; the Journal of a Foreign Correspondent, 1934-1941 Summary & Study Guide includes comprehensive information and analysis to help you understand the book. This study guide contains the following sections:

This detailed literature summary also contains Topics for Discussion and a Free Quiz on Berlin Diary; the Journal of a Foreign Correspondent, 1934-1941 by William L. Shirer.

Berlin Diary, the Journal of a Foreign Correspondent 1934-1941, by William L. Shirer, is the fascinating story of the author's experience as a news reporter in Nazi Germany. The book is written from the author's journal from 1934 until 1941 in diary form. Shirer discusses the people he met, the places he went and the various situations he found himself in.

The author and his wife Tess spends the year of 1933 on sabbatical in Spain. Shirer needs to recover from illness he has suffered in India and Afghanistan and an injury he sustains while skiing in the Alps. When he returns to Paris, France, it is a different world that he returns to. Adolph Hitler and the Nazis are completing their first year of holding power in Germany. Both the fascist and communist movements are popular in Europe. Shirer and his wife love Paris but the situation in Germany interests Shirer and he accepts a position in Berlin the following August.

In Berlin, Shirer covers various rallies and press conferences. He watches as Hitler violates the Versailles and Locarno treaties and establishes a German army. Soon after this, the news service that he works for folds and he obtains a job as a radio news broadcaster with Edward R. Murrow and CBS. Radio broadcasting is something new to him and is subject to the censorship of the Nazis. In addition, he must rely on their short-wave transmission facilities.

Shirer watches as the various European countries fall to Hitler. If they do not accept Hitler's terms, the Germans invade. Most countries however accept his terms and became part of the Reich. Others offer resistance and are forcibly overcome by the Germans. Shirer wonders why England and France do not intervene. War is not declared by England until Hitler takes over Poland.

Shirer remains in Berlin to cover the war until 1940. He travels around to the various countries surveying the situation and talking to the people. He describes life in Nazi Berlin ranging from the lack of coal for heat to the rationing of food and other items. At this time, his wife and infant daughter live in Geneva where it is considerably safer. Shirer wants Tess and the baby to go to America, which they finally do in October 1940. He follows in December deciding that he cannot be effective in Berlin due to the degree of censorship his work is subject to.

The book is lengthy but very interesting to read and the reader will find the book worth the time spent reading it.