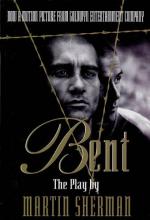 The play Bent mentions that, besides the yellow star worn by the Jews and the pink triangle worn by the homosexuals, there were other symbols for prisoners of the Nazis. Political prisoners wore a red triangle and criminals wore a green one. Research the designations and treatment of those who wore the red and green triangles. For example, people who sheltered Jews were considered political prisoners.

Some members of the Jewish community were offended that the character Horst said that the homosexuals were considered the lowest of the concentration camp prisoners, implying that they got the worst treatment. Do you think that Horst's statement diminishes the Jewish experience? What does Holocaust literature say about this issue?

Write a report on the "Night of the Long Knives." How does it compare to other notorious Nazi massacres such as Kristallnacht?

Cabaret is another famous...