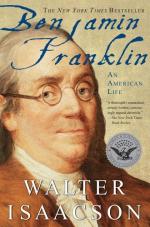 Walter Isaacson
This Study Guide consists of approximately 32 pages of chapter summaries, quotes, character analysis, themes, and more - everything you need to sharpen your knowledge of Benjamin Franklin.

This detailed literature summary also contains Topics for Discussion and a Free Quiz on Benjamin Franklin: An American Life by Walter Isaacson.

Benjamin Franklin: An American Life is an account of the deeds of founding father Benjamin Franklin from his humble beginnings as the apprentice of a printer to his international status as wise sage and practical philosopher. Franklin is always clever and practical. He outshines his brother James the printer, to whom he is apprenticed, and James' jealousy over Benjamin's talent causes him to run away to New York. He meets another printer on his journey who recommends Philadelphia, which becomes Franklin's home. After a brief trip to London where he expels his boyish immaturities, he returns to Philadelphia and marries Deborah Read. In Philadelphia he works as a printer and forms the Junto, a collective of intellectuals. He wasisvery interested in public works and creates a list of moral traits he tries to incorporate into his everyday life. Franklin has three children: William, a bastard, Frances, who dies from smallpox, and Sally. Franklin is civic-minded and dislikes the Penn Family's Proprietorship. He is elected a member of the Assembly and retires as a printer to focus on other interests. He obtains international fame with his invention of the lightening rod, ending the threat from lightening and the fear of its supernatural powers. He forms casual relationships easily, especially with women, but has difficulty maintaining long-term meaningful male relationships, including with his son William. Franklin is sent to London to argue against the Proprietors in 1757. He is sent to discuss taxation, and will return in 1771 to discuss similar issues, including Britain treating the colonists as second-class citizens. Through most of the discussions he seeks to gain for the colonies equal standing in Britain, though eventually it becomes clear the only course of action is for the colonies to break with the Empire. He suffers a humiliating defeat in the Cockpit of the King's court, and in later years will wear the same suit when he triumphantly brings about the French treaty. During his second stint in London Deborah dies, and he does not return though William begs him. As the Revolution erupts Franklin is made Postmaster and has to devise a route to include Canada. William remains a Royalist and father and son irrevocably split. In 1776 he is sent to France to solicit French aid in the American conflict. He is a celebrity in France because of his famed lightening rod and plays well the roles of politician and backwoods sage, even famously donning a fur cap and plain clothes. He is notoriously flirtatious and forms relationships with notable Frenchwomen. He negotiates France's aid by playing France and Britain off one another, and later helps solidify the peace agreement with Britain after the war is decided. In returning to Philadelphia he lives with his daughter Sally and her family, and expands his house. He is much closer to his grandchildren than his own children. He serves in the Pennsylvania Assembly and helps draft the Constitution, which benefits from his willingness to compromise and his pragmatism. His wry humor and folksy anecdotes become part of American culture, as does his belief in the middle class and the ability of a man to better himself based on hard work and merit.

More summaries and resources for teaching or studying Benjamin Franklin: An American Life.